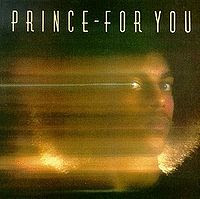 You ready for some Prince? Settle in - we're taking it from '78 to '88 (possibly '89), or what I consider Prince's Decade of Dominance. Possibly excluding his first two records (this being one of them, obviously), the dude was flawless for the better part of ten years, and prolific-as-shit to boot. Let's get to it.

Only Prince could take a few major-label albums to get warmed up. Don't get me wrong: this album and its follow-up were both modest hits, but we all know it wasn't until Dirty Mind that the little guy finally found his groove. Still, this record is notable for a number of reasons. First off, it's Prince's debut record, and he recorded it when he was 19. He was still a teenager, for chrissake. And, of course, he was already writing, producing, composing and performing the whole damn thing by himself. (He certainly had some help on this record and many others, but it's always been fun to believe that he truly is the one-man show.)

How this kid convinced Warner Bros. to let him produce his debut record is beyond me - though I'm sure there's some story to it - but it's pretty damn cool. And apparently he spent three times the money he was allotted for the recording, which is hilarious to me for some reason. This brash newcomer, etc...

1978 was a rough year for music in general, and for someone who was clearly looking to make a name for himself, Prince must have felt confused as to which direction to take. It shows in the songs on this record, which flutter between R&B pop crooners ("Baby," "My Love is Forever"), delicate balladry ("Crazy You," "So Blue"), full-on disco ("Just As Long as We're Together," "In Love"), and incongruous funk-rock (the awesome "I'm Yours").

"Soft and Wet" ended up being the only semi-hit, and though it's a bit disco-fied, it's the pop aspects that make it memorable, as well as the innuendo-filled lyrics. Price must have noticed this, because it's an angle he would go on to work into his signature sound.

This record sounds mad dated now, but I still think it's cool as shit. If nothing else, it's Prince's debut and he's rocking a sturdy 'fro on the cover. You can love it for those two reasons alone.

Oh, and I should probably mention that Prince is very un-YouTube friendly, so if any of these audio links get pulled, I apologize.