Stallion Alert at the Movies: Under the Cherry Moon (1986) 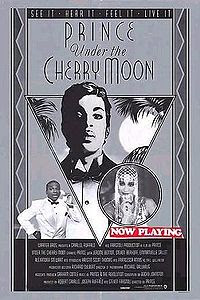 Proof positive that Prince could do whatever the fuck he wanted at this point.

How about a noir-style cutesy-drama, shot in black and white, directed by and starring Prince, that features only half of one song as a musical performance? Clearly, no one was going to say no to him around this time, but they had to have known this wasn't going to work out.

Aside from the frustrating lack of musical numbers, watching this movie now is actually fairly entertaining. It's certainly an ego-driven mess, but viewed as a document of where Prince was at in 1986, it's so strange that - at times - it's infatuating. Still, do I want to sit through this thing again anytime soon? Nah.

Prince and Jerome Benton (from The Time) star as two money-swindling playboys who apparently play music for a living (though you don't see much of that). They fall for a girl (Kristen Scott Thomas) who's due to inherit a large sum of money, and all sorts of tomfoolery ensues. The film keeps getting pulled between Fellini-esque abstractness and madcap comedy, but they never lean hard enough to either side. There's a loose plot, but the whole thing is based in this weird fantasyland where it's 1940 and 1985 at the same time, and you never feel grounded enough to believe a bit of it.

Still, like I said, watching Prince do his thing is entertaining enough, but you quickly find out that it's way more entertaining when there's the promise of a musical performance ahead. As it stands, a lot of the songs from Parade make their way into the movie, but they're almost all relegated to background status.

If you've got the patience, this thing is worth watching. If nothing else, you can just marvel at the fact that it exists. It really does seem like some strange, Prince-led dream.

Trailer
Posted by Wockenfuss at 1:08 AM