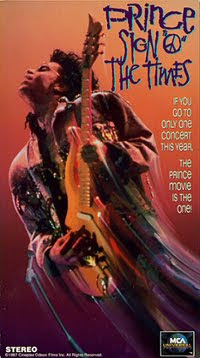 The only thing that could have made Prince's best record any awesomer would have been if he released a movie to accompany it. So, because Prince is awesome - and because he probably wanted to wash the taste of Under the Cherry Moon out of society's mouth - he went ahead and dropped this bad boy.

I've been trying to think of theatrically-released concert movies that top this one, and all I can come up with is Stop Making Sense by Talking Heads. And while I'll probably always give that one the nod, Sign "☮" the Times is a very close second. Like I said: Prince was untouchable at this point.

Though there's a few tidbits of a storyline sprinkled throughout this thing (kind of hard to explain), it's really just a straight-up concert video. And though it's not simply footage of a one-off show (much like Stop Making Sense isn't), it's made to feel like one, and that's just as good. Prince is in rare form in this movie, and it's fun as shit to watch. He even gets behind the drum kit, for cryin' out loud.

Prince and his band barrel through 12 tracks from Sign "☮" the Times, and also throw in a short version of "Little Red Corvette" and a Charlie Parker cover. The album cuts are almost all different from their recorded versions, which makes this thing even more interesting. Lots of weird intros, outros, extended jams, and even a few songs mixed together ("Forever in My Life" and "It"). This was during the short-lived Sheila E era, and she's featured prominently in this thing, banging the shit out of her drums. The lady's an ass-kicker. The whole band is full of ass-kickers. And Prince plays plenty of guitar throughout, which is always a good time.

The fact that this movie has yet to see a U.S. DVD release is a real crime. Apparently it's available in Canada, but it's a bare-bones release, so I'm not too intrigued. The word is that a bunch of other songs were filmed and not used, so I'm holding out for the deluxe edition that will probably never arrive. Until then, I'm still the proud owner of a VHS copy. And I watch it every once in a while. And it never disappoints.

Trailer
Posted by Wockenfuss at 2:43 AM