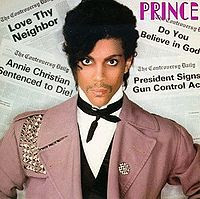 Released almost exactly a year after Dirty Mind, Controversy is partly a continuation of what he started with his previous record, but it also features he and his band (The Revolution, though they weren't officially called that at this point) moving towards the kind of songs that would make him crazy-famous in the next few years.

The title track is catchy as all get-out, and it's one of two seven-minute-plus songs on this record. Dude was starting to sprawl out, and it was a great move. "Do Me, Baby" is the other one, and both tracks have middle sections that let Prince really show off his songwriting/musical chops. "Do Me, Baby" is a little much in parts, but it's a solid slow jam.

And it's about as laid-back as this record gets. Prince sounds amped-up and excited throughout this thing, with cuts like "Sexuality" and "Private Joy" taking the fast-ass pop song approach and yielding some sweet dance tunes. "Ronnie, Talk to Russia" was probably his most overtly political song up to this point, but it's mostly just a great two-minute pop track. The stabbing keyboard bits and machine gun sound effects are nuts, but they somehow work.

"Let's Work" is sparse funk, which Prince had completely mastered by this point. The drums are huge, the vocals are used only when needed, and the arrangement is fairly complex. "Annie Christian" is easily the most abstract track on this record, and though I've never fully embraced it, I do enjoy how all-over-the-place it is.

And, of course, there's the let's-make-everyone-uncomfortable pop perversity of "Jack U Off," which still seems out of place as the closer to this set of songs, but it's such an over-the-top juxtaposition of poppy pop and dirty words that I'm just thankful it's on here at all. Seriously: one of his most squeaky-clean pop songs musically, but, as you can tell from the title, there's nothing sterile about the lyrics. I'm assuming that was the idea. Only Prince could pull that off.

At this point, Prince was famous, but from what I gather, still kind of cult-y famous. His next record would be the one that brought him one big step closer to legendary-famous.

"Controversy"
Posted by Wockenfuss at 1:35 AM