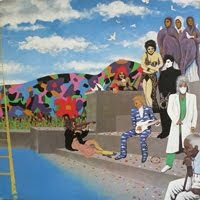 The world barely had to wait to find out how Prince would follow up on the mega-success of Purple Rain. Released less than a year later, Around the World in a Day remains one of Prince's most underrated records, and one of the coolest things the dude ever did.

The record was released with hardly any promotion at all. It just showed up in record stores one day. No advance single to build up the hype, no big announcement - just a record in a store. Now, considering that this was to be one of the most highly anticipated albums of the 80's, I think that was a pretty sweet move.

Also a sweet move: the weird-ass album art. The CD versions have gone on to have this little kid holding a balloon with the title of the album and the name of the band in it, but the original LP cover doesn't have him. I think maybe they put this sticker on the shrink, though. Not sure about that. But I do know that the spine is blank, and the song titles and artist/album name are on a strange wrap-around thing that is perforated and goes around the right side of the record cover, where the gatefold opens. (You can sort of see it on the right in this photo.)

Not only did Prince go the weird route with the cover art and the nonchalant release (which must have driven his label crazy), he also made a record that was nothing like Purple Rain. People like to think this record is a bit more psychedelic than it really is, but compared to his previous work, it's borderline experimental. And, of course, Prince totally revamped his look, revamped the look of his band, and reinvented himself when people would have been more than happy to have more of the same. In true Prince fashion, while everyone was going nuts for Purple Rain, he was already recording his next record and moving on to the new shit. Awesome.

And the songs here are awesome. "Paisley Park" should have been a huge hit, and I'm not sure why it wasn't. Prince never really flirted with sounding like The Beatles, but this was as close as he ever came. "Condition of the Heart" is a sprawling ballad that can be a little much, but it's such a weirdly layered track that it ends up being pretty cool. "Tamborine" is frantic, hammering, and just crazy good. This is Prince inching towards his next musical step, and it's great.

"America" is a bit of a funk throwbacker, but not enough to sound regressive. A cool song. And "The Ladder" is a huge, gospel-y ballad that makes it all work. We also can't forget "Pop Life" and "Raspberry Beret," the two big singles from this record. "Pop Life," especially, is just an incredibly infectious tune, and one that seems to sum up some of Prince's thoughts on the current time. ("What you putting in your nose?/ Is that where all your money goes?") The album wraps up with the supremely weird "Temptation," which somehow makes perfect sense.

This is a standalone Prince record that really isn't like a lot of his other stuff, and I've always been drawn to it for that reason. I can see why it's overlooked a bit here and there, but it shouldn't be. Get with it.

"Raspberry Beret"
Posted by Wockenfuss at 1:27 AM