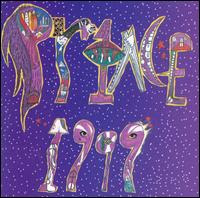 Hey, remember when all of Prince's videos looked pretty much the same, like they were shot at the same sound stage? There was "Why You Wanna Treat Me So Bad?," "Dirty Mind," "Controversy," "Sexuality," and a few more that we'll get to off this record. I'll point them out. Anyway, what the hell was the deal with that? Oh, Prince, you are one of a kind.

So, I'm starting to see things working in twos for Prince, and if For You and his eponymous album were Phase One, and Dirty Mind and Controversy were Phase Two (they were), then 1999 would be the beginning of Phase Three. And it was.

Phase One: Get your foot in the door; hook up with Rick James. Open some shows for him until you realize you're way better than him and you don't like drugs. Get the fuck out of there and vow to take over the world on your own.

Phase Two: Work some new-wave-y shit into your music to hook the kids, but also make the lyrics ultra-dirty and wear nothing more than a trenchcoat, black speedo, and thigh-high boots. Suddenly you're a topic of conversation. Oh, also write some really good songs.

Phase Three: Put some damn pants on and write songs that are so good that mainstream radio can no longer afford to ignore you. Make hacky allusion to used condoms in a song that is ostensibly about a sports car. Laugh as middle-aged people everywhere lap it up, buy your album, and then find out that you say things like "I sincerely want to fuck the taste out of your mouth" on it. Cash huge checks.

Again: Only Price could pull any and all of this off. He somehow kept getting better and better, managing to not only remain filthy as fuck, but also to get some serious mainstream play. Both "1999" (check the soundstage video!) and "Little Red Corvette" (soundstage) were big hits, and yet this record was his most musically challenging yet. It was also his best record yet, by a long shot. His previous two were mighty solid, but man, 1999 is a whole different beast.

With seven of the eleven songs clocking in at six minutes or over, and the two "short" songs running at a solid four apiece, it was clear that Prince wasn't really interested in the two-and-three minute pop jam anymore. Not that he was ever really reliant on that, but considering that this record was longer than his two previous ones combined and contains five fewer songs, you can certainly feel the shift. And it's great, because once again, it feels like a whole new Prince. "D.M.S.R." and "Automatic" (enjoy the soundstage - and the perviest Prince video yet) are both over eight minutes long, and they're rarely repetitive. Yeah, they feel a little self-indulgent in parts, but fuck it: it's Prince.

"Something in the Water (Does Not Compute)" and "Lady Cab Driver" must have satisfied the shit out of Prince's fans who thrived on the weird shit, and "Free" and "International Lover" brought the slow jams to a whole new level. But, as always, it's the catchy melodies - which Prince was a mastermind of by this point - that make this record so incredible. "Delirious" is pure pop brilliance, a surprisingly simple track that squeaks just right. "All the Critics Love U in New York" isn't nearly as formulaic, but it's just as catchy. A really cool song.

But it's "Let's Pretend We're Married" that really steals the show on this LP. The title track and "Little Red Corvette" will always be more well-remembered, but it's the superior song. In fact, I'd have to say it's Prince's best song up to this point in his career. Just an amazing track.

As you can tell, I highly recommend this record. In fact, it's probably my second-favorite Prince album. It's always been overshadowed by the one that came after it, and that's more than understandable. But don't forget about this bad boy.

To help you remember, here's a video shot on a soundstage: