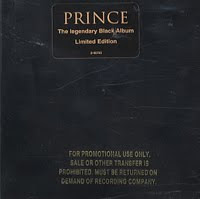 The story behind one of the most famously recalled/bootlegged/fabled albums in history is still a little hazy. This much is true: Prince put together an album - this album - that was to be his follow-up to Sign “☮” the Times. And a quick follow-up, at that: the record was supposed to be released a scant nine months later, in December of 1987. At the last minute, after initial copies had been pressed and promos had already been sent out, Prince called it off. He wanted it back.

Stories about why Prince decided not to release it vary, but it usually comes back to him deciding that it was evil, or too dark, or he took ecstasy and had some premonition or something. Whatever the reason, it immediately made the album mysterious and sought-after (the name certainly helped, I'm sure), and through a promo or two that got away, the thing got the shit bootlegged out of it.

I'm still unclear on how many actual copies of the 1987 pressing exist that aren't promos. This one showed up on eBay last week, and as you can tell, somebody really wanted it. (If the link is dead, the auction was for a sealed, longbox copy of the CD, and it went for $3,150.) They're claiming one like that hadn't been sold in fifteen years, but who knows if that's true. Even if it's not, you get the idea: it's probably the rarest and most sought-after compact disc in existence. (Please leave a comment if you know of another one in contention.) You can read a bit more about it on this site, though it hasn't been updated in forever.

I first heard The Black Album (not the official title, btw - it actually has no title) in 1994, when Warner Bros. did an official - though limited - release of it. I picked up a promo copy on cassette from my local record store, which was odd considering that I was way out of Prince mode at that point in my life, but I had heard so many rumors about this record that I just had to hear it.

Of course, like any album that you've built up in your mind as something that is so crazy that it had to be kept from the world, it did not live up to my expectations. I'm still not sure what I expected, but this funk frenzy was not it. I used to listen to the tape here and there, and after a while, I began to accept The Black Album for what it is: a totally decent Prince record.

The good stuff ("Le Grind," "Cindy C.," "Rockhard in a Funky Place") follows up on the party-time funk that Prince had mastered on his previous record. The hip hop shit ("Dead On It," "Bob George") feels forced, and strangely defensive. It's developed more of a context as the years have passed, but they still don't quite work. And the leftovers (The bizarre, mostly-instrumental "2 Nigs United 4 West Compton;" the slick synth-funk of "Superfunkycalifragisexy") feel like B-sides. (Oh, and "When 2 R in Love" is on here, too, but we already knew about that one.)

I still dig this record, and really, it's about as good as Lovesexy. So I guess that makes sense. In fact, if you put the two together, you've got yourself some nice '87/'88-era Prince. And there's nothing wrong with that. Even Prince's weaker stuff from that era is always worth listening to. Dig it.