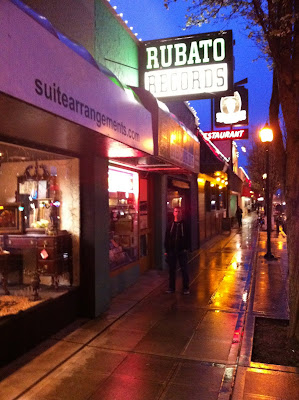 When we left the Queen Anne Easy Street, our plan was to go directly to the other one - the West Seattle location that we'd never been to before. So, we headed south, then veered west, crossed a bridge, and parked the car on California Ave. As we got out and started toward the weird four-way crosswalk that would lead us to Easy Street, I looked south half a block and saw the sign that you see up there. Could it be? Another record store? It was a little after 7, but we knew Easy Street was open till 9. We decided to investigate.

The sign on the door at Rubato said it closed at 7, but there was still a bin of VHS tapes on the street and a dude milling about inside. I opened the door, asked him if he was still open, and he said he'd hang out if we wanted to look around. Cool. We browsed for about 20 minutes before he said he was ready to go, but we found a few things amongst the odd mix of music, DVDs, and VHS tapes. Lots of vinyl crammed in there, and he seemed negotiable on the prices. I like both of those things.

Here's what I got, after putting down a copy of Big Daddy Kane's Looks Like a Job For..., which I just couldn't pull the trigger on for twenty bucks: 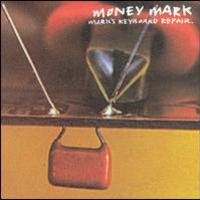 Pocaroba gleefully clowned my continued devotion to this album when I was purchasing the still-in-shrink 3x10" version that I found while digging through the New Arrivals at this place, but I feel no shame. This continues to be one of my all-time favorite mostly-instrumental records, and I will not apologize for that. Great record to put on if you want to get shit done. And the package that this thing comes in is cool. 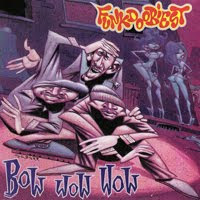 I still hold some strange place in my heart for Funkdoobiest, though I doubt I'll listen to this single much. Kind of a weird one. It's on clear vinyl, so that's pretty cool. But it doesn't contain the album version of "Bow Wow Wow." Instead, it has a remix, a radio edit, and an instrumental. And the remix isn't that much different than the album version. Side B has "I'm Shittin' on 'Em," and then a clean version where the swear words are cut and the chorus is changed to "I'm Flippin' on 'Em." And then an instrumental of that track. Still feeling good about this one, though. 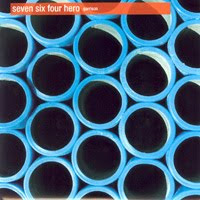 I took a little list of things I was looking for to remind myself in times of confusion. "764-Hero 45s" was on that list. 4 bucks and we're good to go. 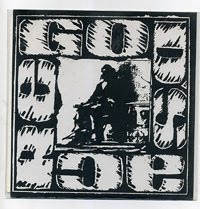 This was a nice little find at one dollar. I always really liked their song on the Teriyaki Asthma compilation. So there you go.

Next up: We cross the street once, and then again.
Posted by Wockenfuss at 10:44 PM