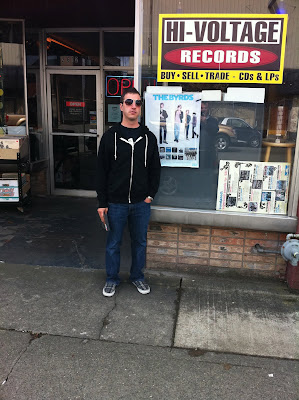 Pocaroba and I had planned to wait until Wednesday to do our record shopping, but we were eager. So, instead, we set out early Monday morning, making it to Tacoma a little before noon.

Our first stop: Hi-Voltage records, which I apparently keep misremembering as a place that I can find good records at semi-reasonable prices. Yes, there are some decent LPs to be found at Hi-Voltage, but their prices are ridiculous.

My favorite example from our last trip: A copy of The Doors' Morrison Hotel, priced at 30 dollars, and stickered as "mint original." Most record nerds will tell you that "mint" should only be used if it's alongside the word "sealed," and while I don't subscribe to that rule religiously, I do know that a record with visible scuffs on the vinyl and a hole punched through the cover is not even in the ballpark. They also had a Doors bootleg that I recently got for $15 priced at $50. Yikes.

Anyway, Mr. Pocaroba and I each managed to find one thing that we wanted that wouldn't leave us financially crippled before we even got started. Me first: 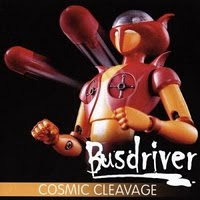 I have been looking for this for years, and I was very happy to finally have found it. This is the Busdriver record that I am the least familiar with, and I'm looking forward to spending the following weeks, months, and years cuddling up to it. Even if you're not a fan, you've got to respect that album title/cover art combo. Don't you? 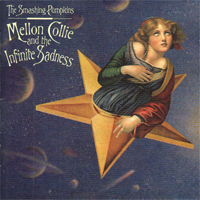 You know when you really want to buy something at a place but the prices are ludicrous? That was my feeling at this place. I found this on the budget wall and closed the deal. I've been looking to get this album on the cheap for years (I used to have the tapes) and this seemed like the time.

Next up: we attempt to go to the place across the street and are temporarily foiled!
Posted by Wockenfuss at 1:02 AM

Go Team Bush! I love hearing about wat you nerds did while we were shopping and eating cheese.