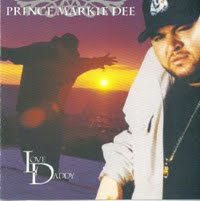 I can't remember how I found out that Prince Markie Dee from the Fat Boys had a solo record (actually, I think he has two), and I still can't remember why I gave a shit. Because I hate the Fat Boys. I like the idea of the Fat Boys, and they're funny in that I-can't-believe-society-let-that-happen sort of way, but their music is flat-out awful.

But maybe that's why I was so curious about the prospect of Prince Markie Dee reinventing himself for the 90's. Dude was still in his mid-to-late twenties when this record dropped (my crack research has his first solo record coming out in '92, btw), so it wasn't like he was washed-up by definition, but things had certainly shifted in the hip hop world, even in the years between this record and his previous one. Sadly, Markie took the route that almost certainly cancels the career of any rapper that dares walk the path: an album filled to the brim with slow jams.

If the title didn't tip you off, dude was out to rebirth himself as an irresistible ladies man, and while better rappers have made the same ill-fated move (I'm looking at you, Big Daddy Kane,) few were brash enough to do nothing but that. This album is straight sex-up songs, front to back. And one is indiscernible from the next. Some are more gentlemanly than pornographic, but for the most part it's a mix of both. He's charming, debonaire, but also wants to rub things on you until they release fluid (Yikes).) He also seems to have an unhealthy obsession with biting. It's all very troubling.

Yet, somehow, I'm still curious to hear his first solo record. Even though I can't get through this one. Huh.

"Crunchtime"
Posted by Wockenfuss at 11:03 PM