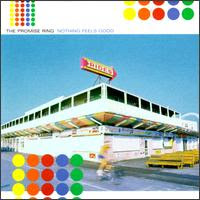 The leap that The Promise Ring made between their debut and this album is fairly astounding.

I don't know if it was due to a better recording environment (the album's production is noticeably sharper), the band honing their sound, or them just getting way better at everything that they were doing (this is my blanket assessment), but when "Is This Thing On?" blasts in, opening the record, it barely sounds like the same band. Davey von Bohlen sounds way more assertive on the lead vocals, and instead of the ramshackle rhythms that characterized their first record, they favor a much more propulsive sound.

And not just on that track. "Why Did Ever We Meet" (arguably their signature song) is another great example, and even the slower songs on the record sound tighter. None of that would matter if the songwriting hadn't followed suit, but it did. There's a reason a lot of folks consider this the quintessential "emo" record: it's really good. It's probably their best, but I don't know if it's my favorite. I realize that statement makes little sense. But I'm partial to Wood/Water. We'll get to that.

Anyway, if you know any depressed teenage dudes, give them this record and a couple wine coolers and they'll either feel way better or way worse after they listen to repeatedly in their dark teenage bedroom. Probably better. This record still puts me in a good mood. I'm man enough to admit that.

"Why Did Ever We Meet"
Posted by Wockenfuss at 8:54 PM