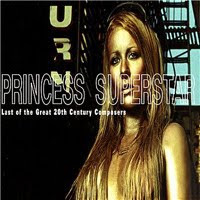 I've never fully embraced Princess Superstar, but I do enjoy listening to her from time to time. I guess that would explain why I only own two of her albums, and why they're the ones that fall pretty much smack-dab in the middle of her catalog.

This is her third, and though I haven't listened to this one a ton, I do like it. The beats are a little fractured, and the whole thing, while not being decidedly lo-fi, does have that recorded-at-home sound. Which I dig. She produced or co-produced most of the beats on this thing, and her beat style's not lazy. In fact, trying to pin down the direction of the music on this thing is tough.

"Do it Like a Robot" is appropriately blippy, while "Sex (I Like)" is way more punk rock than hip hop. The rest of the stuff falls somewhere in between, with vintage drum samples that pound and distort, and synth flurries that aren't ever predictable. She doesn't sound overly confident on the mic on this record, and sometimes her matter-of-factness is frustrating. When she duets with Baron Ricks (?) on "Come Up to My Room," dude comes out aggressive while she stays laid-back, and the end result feels a little uneven.

But whatever. This record has a lot of depth to it, and it might be her last one before she tried going for some mainstream-ish cred. Or at least that's the way it looks to me. But I don't really know her catalog well enough to say that. But I'm saying it anyway.

As a Princess connoisseur, I have to say that this is my least favorite record of hers. Ironically, it is also the first one I ever purchased. I bought this at Wherehouse, sound unheard, and dug the basic idea of it. I was lucky enough to find her previous album CEO, and really got into that one. That album is much more straight-forward hip-hop with a running theme of a corporation to hold it altogether. Later, I found her first album, which is an odd hip-hop/indie rock affair. She has an actual band on that one. So yeah, this album, in the grand scheme of things, is an odd mish-mash of electro songs and hip-hop offerings that never really seems to gel to me. But still, you have to give her points for creativity.