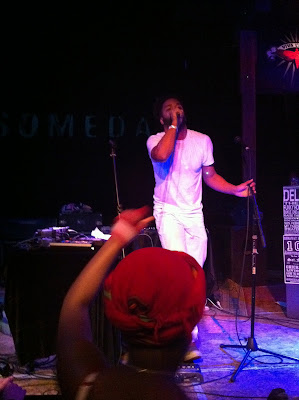 Busdriver has turned into one of the only artists that will get me to drag my old-man ass out on a Friday night to see a show, and that's because I know I'm going to enjoy it. He's full of energy, doesn't chit-chat too much, and just plays the shit out of his music. I am a staunch proponent of all of those things.

This show was even more exciting for me because I was, against all odds, actually looking forward to seeing one of the opening groups. I got turned onto Dark Time Sunshine earlier this year, and found myself coming back to their album Vessel quite a bit. So, I was really looking forward to seeing how they would pull off that shadowy-ass sound live.

I got to the show at around 10:45 (there were two, maybe three other openers who I wasn't dying to see), and caught most of the guy-before-Darktime's set. It wasn't really my thing, but it gave me a chance to meet up with my friend who was there and say hi to some other people that I knew. There was a good crowd at the Someday, though it seemed to be biggest when I first got there. Weird.

Anyway, Dark Time Sunshine (Onry Ozzborn and producer Zavala) hit the stage around 11:30 and I was ready for it. The music actually translated really well to a live setting, with Zavala working a drum machine, doing some backing vocals, and also just some random tinkering and knob-twiddling, all while bobbing his head and clearly having a good time. Ozzborn looked stoned to the bone, but his laid-back don't-give-a-fuckness is part of what makes the music so eerily hypnotic, so I thought it worked.

Good stuff. They played a solid set, tossing in some Onry songs off his new record, along with a lot of the cuts from Vessel. I made sure to buy their CD after the show, because I had been listening to a "free" copy for a long time. So, that's me patting myself on the back and telling you how much I support artists. I'm welcome.

Busdriver came out pretty quick after that, and unlike the last time I saw him solo, he was all by himself. He had a small table with a few samplers on it, two microphones (one of which was hooked up to foot pedal thingy), and a couple other little boxes that he didn't seem to fiddle with. He also set up a green light at his feet, so for the first four or five songs of the set, he looked like this: 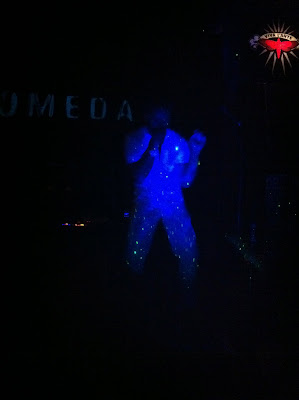 Pretty cool. Anyway, he did a few tracks off his latest mixtape, Computer Cooties, but other than that, it was the "hits": "Sunshowers," "Avantcore," "Casting Agents & Cowgirls," etc. He fucked with tempos and hammered on beats with the samplers, and jacked up his vocals with the footpedals hooked to the one mic. Made his set frantic as shit when coupled with the fact that he barely stopped moving, rapping, or beating on his machines. It was great.

He didn't play for too long (which is fine by me), came out for one short encore, and then left us with a beat that he "made in his bedroom the other day" as he walked off stage. Dude's a weirdo. But he puts on a great show.

I picked up the Hoofdriver 7" on yellow vinyl while I was there, and I have listened to it six times in the past few days. It is sweet.

If you haven't downloaded Computer Cooties you should cop that shizz.
Posted by Wockenfuss at 12:56 AM