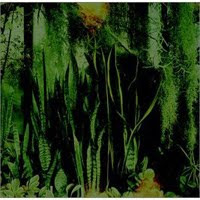 In between Very Emergency and this, the band's last album, lead singer Davey von Bohlen developed a brain tumor and had surgery to have it removed. Much has been written about how that event affected the overall scope of Wood/Water, but I think those theories are reaching a bit.

What I hear when I listen to this record is another natural shift in the band's sound. And yes, some of the lyrics are noticeably morose, and the overall feel of the album is noticeably darker than its predecessor, but that's not saying much. Very Emergency was shockingly bright; almost anything was going to be a step in a more sullen direction. I guess what I'm saying is I don't really give a shit about any of that. I think this is a really fantastic album, and it's always annoyed me that it's their most divisive.

This was the only record that The Promise Ring put out when I was a current fan, so it's the only one for which I experienced any anticipation. I wasn't freaking out, waiting for its release, but I didn't waste much time buying it when it came out. (Still regret not buying the 2x10" version. Don't see those around much anymore.) But here's what irked me: Spin had done nothing but build up the band during the late 90's, and were clearly fans. But when this record came out, they gave it a 5/10 and compared the band to Train. Yeah, it's just a review, but it was the lead review in the issue and it was dickish. The Promise Ring broke up shortly after this album was released.

I'm not saying that the review had anything to do with it, but for some reason it felt like that to me. I dunno. A lot of great records are the ones that you don't see coming, and I feel like that's the deal with this one. And I felt like the band was just getting started with a new sound on this thing. It doesn't sound like a Promise Ring record. It doesn't really sound like any other record I own. It's a weird side of a band that had never even flirted with being weird. And I really feel like it worked.

I'm not sure how this record comes across without any frame of reference to their previous output, but if you need a good rainy-dayer, I'd look into this one. I'll just leave it at that. And we'll leave The Promise Ring with that.

"Stop Playing Guitar"
Posted by Wockenfuss at 12:51 AM