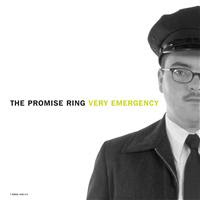 I think I mentioned it before, but if I didn't: this was the first Promise Ring album I bought. Picked it up brand new on vinyl (apparently I sold that at some point) after reading a bunch of complimentary articles about the band. I didn't really know what to expect, but given that they were synonymous with the "emo" label, I guess I figured their music would be way more forlorn and depressing than the songs on this record.

In fact, when I heard the opener, "Happiness is All the Rage," I was struck by the feeling that I had made a bad call in picking up the record. "Skips a Beat (Over You)" and "Arms and Danger" (though that one may be sarcastic in its intentions) did little to assuage that notion. After I accepted the record for what it is - peppy pop that is sometimes way too enthusiastic - I learned to enjoy it, though a bit guiltily.

Let's be honest: I'm not usually into bands that regularly tour with Jimmy Eat World. But I liked these songs, and as I mentioned before, this record caught me at a time when I may have been a little more vulnerable to music that was expressing feelings, no matter what they might be. And if this album put me a better mood than I was often in, I don't see the harm in that.

But I don't want to spend this space defending my enjoyment of The Promise Ring (though I apparently feel like I need to). They're certainly not for everybody, but they definitely heavily connect with some people. I don't think I'm that person anymore, because I rarely listen to this record these days. But, I also don't plan on getting rid of it.

If nothing else, it still reminds me of being up at 4am on a Tuesday while singing along with "All of My Everythings." Which is a depressing memory that I've somehow found a way to cherish. That's the most emo thing I've ever said.