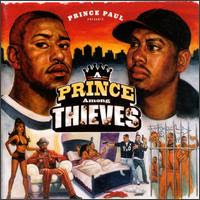 Prince Paul might be too sharp for his own good.

This album should have been a monumental moment for hip hop, but instead, it performed poorly on the charts and only got Paul critical respect - no chart love. But fuck it: ask anyone who knows anything about this record, and they'll tell you how not-of-this-earth it is. Prince Paul is really the only person that could have pulled a "rap opera" off and not had it suck, and he did it, thanks not only to his stellar beats, but also to his gaggle of famous friends.

But I get it: there's a lot of talking on this record, and it's an hour and fifteen minutes long. It's a bit of a commitment. Well, make yourself a version without the skits, and roll with it. You'll find that even if you ignore the story - and I wouldn't blame you if you did; it's not like you need to hear the skits over and over - this record is filled with dope-ass tracks. Big Daddy Kane's "Macula's Theory" and Kool Keith's "Weapon World" are worth the price of admission alone. And "The Men in Blue" features Everlast's best post-House of Pain performance.

I get why this album wasn't popular (in that selling-lots-of-records way), and even I'll admit that I have to be in the right mood to want to take in the constantly-shifting sounds that this thing pumps out. But when I'm ready for it, I still marvel that this album exists. It's just so damn ambitious.

And its "failure" is probably one of the reasons Prince Paul tends to get pissy about the music biz sometimes. His next record is a prime example.

"A Prince Among Thieves"
Posted by Wockenfuss at 10:46 PM