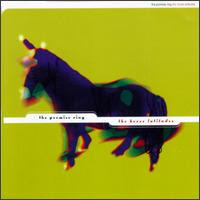 This transitional EP collects tracks from The Promise Ring's first three 7"s (one of which I used to have, and must have gotten rid of when I bought this), and adds two other songs that were unavailable elsewhere.

These tracks are from the same era as their debut (some before), and so there's not much movement here. The songs are solid enough, and the two previously unreleased songs ("Miette" and "I Never Trusted the Russians") are short on lyrics, but otherwise don't show any outward signs of why they hadn't seen the light of day.

I never listened to this disc much. It's short, and though, like I said, it's not bad, it really does feel like a collection of singles, so there's not a lot of cohesion to it. Not that that's an excuse to not take a shine to it, but I guess I'm using it as one. And, the production on these tracks suffers from some of the same flaws as their debut: vocals are buried, guitars are undefined, and drums are thuddy.

A nice companion to the first album, I suppose, but again, it sounds noticeably elementary compared to their next stuff.