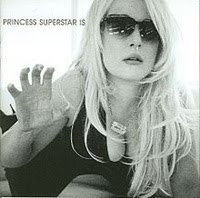 The Princess gets a little poppier on this one, turning up the hooks and leaning noticeably harder on the sex kitten persona that she pulls off well. Thankfully, cutesy songs like "Bad Babysitter" and "Wet! Wet! Wet!" don't tarnish the overall feel of this record, and they don't even suck (somehow).

But she's still at her best when she's putting witty rhymes together over beats she makes herself, and that's why the second half of this record ends up, for my money, being better than the first. "You Get Mad at Napster" is one of the dopest tracks on the whole damn thing, and considering this came out a decade ago, a song about an MC blaming the internet for not selling any records must have been hyper-modern at the time. It's still extremely relevant today, probably even more so.

So, while I don't care for her sexy raps as much as I care for her I'm-a-better-MC-than-you raps, this record balances it out nicely. The production ends up sounding a little random, because some of the tracks (the ones she didn't produce) are ultra-clean and even a bit mainstream-y, and when pushed up against some of the more lo-fi-ish stuff, there's a clear divide. But whatever. This is a fun-ass album, and she flexes some solid lyrical skills here. And a duet with Kool Keith is always encouraged.

Jeez, I rocked this album HARD when it came out. The Princess finally put out a nearly straight up hip-hop album and I was all to ready to rock it. I agree that "You Get Mad At Napster" is an insane song and "Keith N Me" is a good time. For my money, "Who Writes Your Lyrics" is where Superstar really shows off her skills and was a mixtape staple of mine for awhile. I saw her on tour on this album and she was really fun to see and super friendly after the show. If that matters.