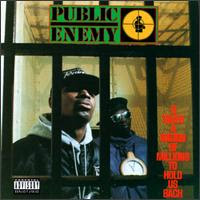 Just scoped my Public Enemy stockpile and came to the realization that our journey through the land of PE is going to be random, way too brief, and threatening to my credibility as a rap fan. Could have sworn that I had CD copies of both Fear of a Black Planet and Apocalypse 91...The Enemy Strikes Black. Turns out I have neither. So that sucks. Pretty sure I still have my cassette copies, so that's something. But that doesn't fit our criteria here. So, there's my disclaimer.

Unlike most people, this album was not my introduction to PE. A few friends of mine had copies of Fear of a Black Planet when it came out, and I think (other than possibly hearing "Bring the Noise" somewhere) that that marked my initiation to the group. I have a vague recollection of owning the "911 is a Joke" cassette single, but I don't have it anymore, so maybe I'm making that up. Either way, I jumped into PE three albums into it, and maybe didn't even hear this one until after Apocalypse 91.

I dig Public Enemy, but if I'm being honest, their music didn't appeal to me as much as a lot of other hip hop, so when it came time to make purchases, they were never at the top of my list. I'm not sure if the political stuff didn't mesh well with my teenage mind or what, but I was never obsessed with them in the same way that I was with, say, Ice Cube.

And when it comes to this album, I've owned it for a while now (I have some weird "Def Jam Remasters" enhanced CD copy), but I don't listen to it that much. I think it's really great, but I don't have that long-lasting connection with it that I do with a lot of the albums I was immersed in 20 years ago. But I'm always happy when it shuffles through on my iPod. And, come on: it's one of the most legendary rap albums of all time.

Still wish somebody would have slipped me a copy of this when I was 13. I also wish I had legit copies of their next two records so I could blab about those, because those are the ones I know the best. Eh. What can you do. Add 'em to the list of embarrassing holes in my music library.

"Don't Believe the Hype"
Posted by Wockenfuss at 11:06 PM

Yes, you owned the "911 is a Joke" cassingle because I used to love it. My rap cool guy status is even more in jeopardy than yours because I have never actually heard this. It constantly makes lists as the greatest rap album of all time and yet I have never heard it. Worse yet, we were huge into rap in '88. How it never connected I don't know. I still want to hear it but am afraid that I won't fully get it since I didn't hear it at the time. So yeah.