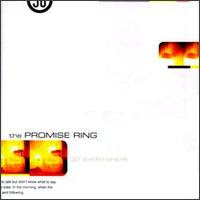 And here's where we talk about my dark, dark secret: The Promise Ring.

Actually, I don't feel too embarrassed about liking this band. They remind me of a certain time (late 90's/early 00's), and during that time, I needed a wuss-rock band like this for drunken, lonely nights. The Promise Ring were great for that, and they were also great for hammering melodies into your head and writing lyrics that, when they didn't go over-corny and end up sucking super hard, were often unexpectedly good.

I started out with their third album (Very Emergency) after Spin wouldn't shut the hell up about it, so I sort of came in in the middle of things. I worked backwards to the one before it, and eventually made it back to this one, their debut, before their final record came out. I wish I would have heard them in order, but in reality, if I had heard this one first, I might not have gone much further.

As it stood, discovering the band's humble beginnings was somewhat charming after hearing their second and third records, but this one is a pretty steep step down (or I guess the other ones were a huge step up), that it was initially tough to process. The recording ain't great, the songs aren't especially interesting, and lead dude Davey von Bohlen hadn't quite found his voice yet. The guy's got a unique singing style, and he totally got it to work on their next record, but here: not so much.

So, this is easily the Promise Ring Record that I listen to the least. But, I've never gotten rid of it, and I played it through yesterday and remembered that I definitely don't dislike it. It just sounds like a young band finding their sound, because that's exactly what it is. Don't kill me, Promise Ring fanboys. I know you love this record. And that's cool. It just doesn't grip me as much as their later shit.

"Anne You Will Sing"
Posted by Wockenfuss at 9:11 PM