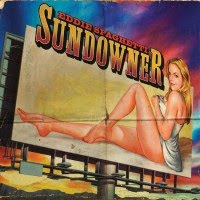 Welcome to a new feature on Stallion Alert, where I'll be reviewing new albums that I've purchased. Think I've done this before, but I never bothered to title is as such. So from here on out, I'll do my best to write up the newly-released LPs and CDs that I've picked up, and add 'em to this new category. Here we go.

This is the third solo LP from the Supersuckers' Eddie Spaghetti, and the first to not see release on the Supersuckers' (now defunct) Mid-Fi label. I didn't expect the label situation to change anything, and it hasn't. This picks up where Old No. 2 left off, which picked up where The Sauce left off: with Eddie doing mostly-acoustic versions of some of his favorite songs, along with a few originals. It's a formula that I think works really well, so if he's not looking to fix what ain't broke, I don't see a damn thing wrong with that.

I picked up the LP version of this, which has 12 songs on it, but comes with a download card for a 14-track digital version that includes two bonus tracks. I'll get to those. But I wanted to mention the LP, because it's pretty sweet. Thick vinyl, nice album art, limited edition of 1000, and, like I said, comes with extra tracks. And they're not trying to gouge you on the price. Which is very cool.

I've been listening to this record fairly steady for a few weeks now, and I've really been enjoying it. Eddie's two originals, the title track and the opener, "Never Thought I Would," are strong, and hold up nicely next to the random selection of covers. He also reworks the Supersuckers track "Marie" towards the end of the record, and while it's nice to hear an acoustic studio version of the song (he plays it live solo quite a bit, and it's on at least one recording), it sort of feels like filler. But it's such a good song that it doesn't really hinder the overall feel of the album.

So, what does? A few things. His cover of Willie Nelson's "Always On My Mind" is certainly heartfelt, but its slow tempo threatens to derail the peppy feel of the LP, especially since it's sandwiched between the rousing "Sundowner" and the awesome (and upbeat) cover of the Lee Harvey Oswald Band's "Jesus Never Lived on Mars." And while his choices for covers are almost always semi-obscure, this one strikes me as a little too middle-of-the-road. But he's a huge Willie fan, so it adds up on that level.

He also includes a song by his pre-teen son, a brief number that closes out the album, called "When Do I Go?" Now, I don't want to sound like a jerk here, because it really is a touching gesture, but I honestly don't understand who this is for, aside from the people who did it and their immediate families. I felt the same way when Big Boi put his toddlers on Outkast records. I'm not trying to be snarky. I just really don't see the purpose of it.

Other than that, this thing is a good time. While his cover of the Dwarves' "Everybody's Girl" isn't quite as awesome as the Junkyard Dogs' cover of "Drugstore," it is still plenty sweet. There's also a Steve Earle track ("If You Fall in Love"), a Johnny Cash tune ("What Do I Care?"), and a Del Reeves classic ("Girl on the Billboard"). All solid.

The bonus tracks live up to their name. Eddie's been doing Thelonious Monster's "Sammy Hagar Weekend" live for a while now, and I was excited to see that it was one of the extra tunes included with the LP purchase. But it was the other one that really caught me off guard: a country-twang version of Prince's "Delirious" with reverbed-out vocals that is cool as shit. Both tracks could have easily made it onto the LP proper. And that's how they'll be sequenced on my iPod.

You can download "Never Thought I Would" here, and if you like it, you should buy this thing.