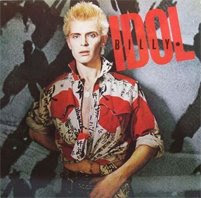 So, while I've been doing this little project (writing about all my albums), I've grown accustomed to peeking ahead to see what I've got coming up, so I can either prepare myself by listening to certain albums, or purchase cheap records that I suddenly realize I don't own and want to include. Ice Cube took a while, but I knew Billy Idol was coming up. As of a few days ago, I only owned Don't Stop, the 12" single for "To Be A Lover," and a jacked up copy of Vital Idol on CD. When I went record shopping last weekend, I decided to keep my eye out for any Billy Idol stuff, just for kicks.

Little did I know I would come across not only an original promo version of his debut LP, but an AUTOGRAPHED one at that. That's right, I found a signed copy. For ten bucks, even! I still can't figure out who Billy made the autograph out to. It says To: LSD, or maybe it's LEO, or maybe it's ZED, I can't really tell. But then it says "from Billy Idol." Awesome. Now, as you can see, on this "original" version, the cover is different from the reissued (and much more common) pressing, AND, instead of including "Dancing With Myself" as the final track (as the reissued version does), it features the bizarre 48-second "Congo Man," which seems to be nothing more than Billy playing congos and chanting. Also awesome.

And you know, the record is pretty solid throughout. Aside from the big hits like "White Wedding (part 1)," and "Hot in the City," it also contains the more minor hit (but better song), "Love Calling." Billy was still sort of shaking off his new wave-ness on this album, and it makes for some dated sounding (duh) but cool tracks. "Shooting Stars" is sweet, and "It's So Cruel" is the patented Billy Idol relaxed track that seems like it's going to be nice until you realize it's all about fucking.

Bottom line: I'm damn excited to add this rare find to my collection.