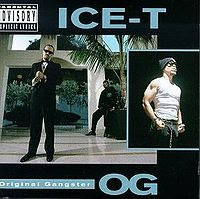 I'm realizing this probably should have been ahead of Ice Cube alphabetically because of the dash in T's name, but whatever. Just know that I know it.

After listening to Death Certificate a bunch lately, and really taking in what Cube was doing in '91, it's put this album (the only Ice-T album I've ever owned) in perspective for me, and reminded me of why I could never fully get into the cassette copy I had in high school. Compared to Cube, Ice-T is a hacky lyricist, and while this is considered his best record by a lot of people, it hasn't aged particularly well. Still, it does bring back a few fond memories.

(I used to have this on cassette, as I said, in high school, hadn't listened to it in at least ten years, and then randomly came across a UK import version of it on vinyl a month or two ago. It was like ten bucks, so I figured what the hey. That's why I have it.)

The beats on this record are actually really strong, though they do sound quite dated when listening to them now. But like I said, I remembered immediately why I could never get into this album completely: Ice-T is not a good rapper. He does a fine job of going through the gangsta rap motions (don't let anyone tell you these lyrics were groundbreaking at this point), and his attempts at social commentary are actually where he succeeds the most, but solid tracks like "New Jack Hustler" quickly make way for snoozers like "Bitches 2" and the failed shock value of "Straight Up Nigga."

The title track has a rumbling beat and flows well enough, but listening to T establish his street cred gets boring pretty quick. "Fly By" is aided by a fast-ass beat, but T's rhyme scheme is straight out of '85. "Lifestyles of the Rich and Infamous" is another track with a dope beat, but the lyrics are basic.

Strangely (or maybe not), the song I listened to the most on this record 15 years ago was "Body Count," T's introduction to his band of the same name. It's still a pretty sweet song, and though I'm not the angry youth I once was, I have no trouble remembering why I dug it. It's unintentionally hilarious, but that's part of the charm.

The album wraps up with T dropping some more street knowledge, and actually, the songs aren't too bad. The problem always was (and still is), if I want to listen to somebody do straight up hardcore gangsta rap, there's a bunch of records that I usually reach for before I grab this one. Still, nice to have around.

"New Jack Hustler"
Posted by Wockenfuss at 1:59 AM