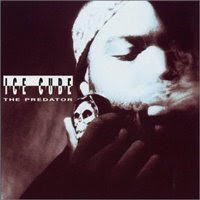 "Ain't nobody talkin' when I'm talkin' fellas, so shut the fuck up."

So begins what would sadly be Ice Cube's last great album. Don't get me wrong, he's done some great music since '92; he just can't seem to get it all onto one album. The Predator represents the end of the old Ice Cube, the last time he really seemed charged and angry, showing minimal pandering towards radio play. (Yes, "It Was A Good Day" was a hit, but I don't think anyone saw that coming.) It's hard to say what happened, but we'll get to that. For now we can talk about how rock-solid this record is. It's not quite as sharp as Death Certificate, but it stands up against any of his other work. Cube's still pissed, still focused, and still lyrically on point.

Released in 1992, this album came at a perfect time. Cube was able to take credit for predicting the L.A. Riots, and his I-told-you-so attitude played nicely. It was an aggressive time for music in general, and his style seemed to gel easily with the brooding rock that was infiltrating the mainstream. It worked on me, I know that. Between this album and the The Chronic, '92-'93 was a damn fine era to be a hip hop fan. This tape was never far from my reach during that time.

"When Will They Shoot?," the first proper track after the American Me-sampling intro, "The First Day of School," is one of my favorite Cube songs. Maybe my favorite Cube song. I've listened to it thousands of times, and it still gets me juiced. While the sampling of Queen's "We Will Rock You" was certainly nothing new in hip hop, Cube took it and made something completely fresh, a chaotic stomper that busted things wide open from the beginning, making his mission clear. In keeping with his previous albums, he started it off with his standard thematic: "God damn, another fuckin' payback with a twist." Yeah, Cube.

There are a few "inserts" placed throughout the album (samples of people on talk shows talking about racism, etc.), and while they're well done, I never understood why he put one right after the first song. Whatever. "Wicked" follows that, and it picks up the stomp where the previous track left off. A great song, and the video that featured Flea and Anthony from the Chili Peppers furthered Cube's rock solidarity, which was a smart move. "Now I Gotta Wet 'Cha" is a solid little Cube's-gonna-kill-ya" cut that is witty enough to not be too generic. It helps that it's got a great beat.

The title track addresses a little feud that Cube had with Billboard, over some disparaging remarks that one of their head honchos made. I can't remember the details of it now, but the gist of the song is that Ice Cube doesn't give a fuck. Sounds about right. I've always wondered if he didn't just need to dis some "editor" because it rhymed with "predator." He works some sweet Predator 2-Gary Busey samples in there too, which is pretty sweet.

We all know "It Was A Good Day," for better or for worse. I'm so sick of this song that I don't think I can even think about it objectively anymore, but I remember it not being my favorite track when I first heard the record. Cube's got some good lyrics on it, of course, but it's a bit slow for my liking. But that's my problem. And I still find the edited version hilarious.

While Cube, DJ Pooh, and Sir Jinx handled most of the production, Muggs from Cypress Hill helps out on this record as well. In addition to "Now I Gotta Wet 'Cha," he provides the beat for "We Had to Tear This Mothafucka Up," which is a great, great song. Concentrating on post-riot anger and assessment, Cube tears into everyone, riding a stand-up bass beat that straight up rules. Make it rough, indeed. "Dirty Mack" deals with those not interested in upholding the sacred code of the streets, and as usual Cube delivers hilarious lines with a straight face that makes them even more funny. "There's a new girl on my street/ And I'm-a introduce her to my meat" still remains as one of the best opening lines on a rap song ever.

"Don't Trust 'Em" hasn't aged quite as well as the rest of this album, but we have to remember that sampling Scarface wasn't completely played out when this album dropped. And Cube can string together a story as well as anyone who ever picked up a microphone. This song is also funny as shit. "Gangsta's Fairytale, Pt. 2" is completely unnecessary, but he somehow makes it work (he wouldn't fare so well on later sequels to some of his classics). The little kid yelling and cussing makes it that much better.

Now we get to one of the huge reasons why this album is so great: it ends strong. "Check Yo Self" has been compromised because of the "Message"-jacking version that accompanied the video, and I've always felt the album version was stronger. Either way you slice it, Cube drops some gems on this one, and flexes all kinds of tough. It's solid. "Who Got the Camera" is pure dopeness, one of the best commentaries on police brutality in the post-Rodney King era. Cube's lyrics here are fucking perfect, from his ruminations on his choice of women ("your fat ass got my six-deuce leanin'") to his astute assessment of the ignorance of the cops ("the pigs wouldn't believe that my slave name was Jackson"). Who the fuck got my nine...?

"Say Hi to the Bad Guy" points again at Cube's Scarface obsession (which had carried over from Death Certificate), but mostly just focuses on his general bad-assness, which we all know is his strong suit. Example: "Bitch, I got so much game I need a referee." These high-tempo declarations are interspersed with a skit depicting Cube and his boys being pulled over by the most stereotypical cop ever, and it's funny stuff. A fine end to a fine record.

I don't want to say this was the beginning of the end for Ice Cube, because that's way too harsh. What it ended up being was a palpable direction switch–or rather his next record was. We'll talk about that.

"Wicked"
Posted by Wockenfuss at 1:56 AM