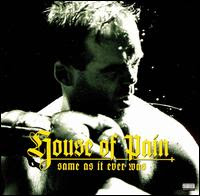 This album has a lot of things. It just doesn't have a single that matches the hook of "Jump Around." That, coupled with the fact that it's generally a lot darker than their debut, might explain why no one gave a shit about it when it came out. I was a huge House of Pain fan after the first record dropped, and I barely even remember this thing being released.

Maybe the rest of the country was like me. '94 was a weird year, and I guess this one just slipped through the cracks. It's too bad, because over the years, I've grown to really like this record. I guess "over the years" may be the key phrase there. It didn't hook me at first.

First off, Everlast sounds like he'd been doing some hard livin'. While his voice was scratchy on their first record, here it sounds utterly wrecked, like he's been chain-smoking for days. So, that's a bit jarring at first. He's also preoccupied with everyone thinking he was dead, which I don't remember. Either way, dude sounds fucking angry, and it's pretty sweet.

In keeping with the usual House of Pain formula, these songs all have hooks, but they're rarely about anything in the lyrics. Again, one of my favorite things about the House. Everlast just raps. That's fine by me. Tracks like "I'm a Swing It" and "Over There Shit" are absolutely great, and the title track is a fine one, too. In fact, I've really learned to like all the songs on this album. Muggs and Lethal team up again on the beats, and they're solid. Like I said, everything's a lot darker than their first record, so maybe that was a turn-off to some. Eh.

If you didn't like HOP's first record, you'll hate this one. But if you liked the first one and have never heard this bad boy, I'd give it a shot. It's actually aged really well.

There was actually a pretty strong rumor going around that Everlast had died, at the time. It was silly, of course, but the follow-up album took more than a year (you'd expect Tommy Boy would want to follow up on the success of Jump Around, but not so much, apparently) to drop, and that fueled all kinds of ridiculous shit.

This album, btw, was far and away the best of the three. No Jump Around, but no filler.

You really think it's far and away better than the first one? I don't know about that, but it is much stronger than it ever got credit for. I've been listening to it a lot lately, and loving it.