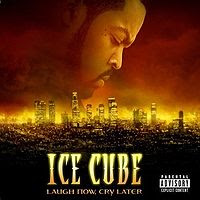 The hardest thing about being a fan of someone like Ice Cube, someone who was so great at one point in his career but has since become disappointing, is holding onto that little gleam of hope, the thought that maybe he'll pull it all back together and drop just one more brilliant record. It's been hard for me to let that go with Cube, though I've done it sporadically over the years. Then I get back listening to Death Certificate and get the urge to check out his new shit. Maybe this new one'll be it, I think to myself.

It's a frustrating line of thinking that constantly leaves me disappointed. I should probably get over it. But there I was a few years ago, picking up Laugh Now, Cry Later. The "featuring Lil Jon" on the back didn't give me much hope, but the "featuring Kokane" gave me a little. Turns out I was right to be hesitant, but this actually ended up being, in the whole scheme of things, a fairly solid entry into the Ice Cube lexicon.

"Why We Thugs" has a stupid name, a typical-but-good Scott Storch beat, and a dope chorus. It's not full-on West Coast, but just enough to let you know Cube's still reppin'. In fact, that seems to be the goal of the whole song. Once again, Cube is reestablishing himself, and this time around, he seems more convincing than he had been in previous attempts. "Smoke Some Weed" follows suit with the stupid name, but I actually like this song a lot, mostly because the beat is a banger. And Cube's random naming of dope-friendly celebs in the beginning is weird enough to totally work.

"Child Support" is Cube calling out his clones again, and he's got the right to do it. The concept of the song is actually pretty sharp, and though the beat lags a little, the song works. "Doin' What it 'Pose 2 Do" and the title track make a nice punchy combo, and also ease the pain of the bandwagon-hoppin' "Stop Snitchin'," if only a little. "Go to Church" doesn't make things any better, with Snoop Dogg once again proving he's one of the most overrated MCs in rap, and Lil Jon fucking things up like only he can.

"The Nigga Trapp" is convincingly dark, and "Growin' Up" picks up where Death Certificate's "Doin' Dumb Shit" left off. It's a smooth one, and Cube lays it out nicely. "Click, Clack – Get Back!" is another lame title and decent song, and "The Game Lord" is robotic, odd, and actually cool in its own way. "Chrome & Paint" features a fairly un-shitty verse from WC, and the song overall is dope.

"Steal the Show" is an uneventful deep cut, and the borderline-terrible "You Gotta Lotta That" again features Snoop barely trying. "Spittin' Pollaseeds" brings Kokane back from the dead for some soul singing over a lounge beat, and WC manages a decent verse. The album ends with "Holla @ Cha Boy," which features a dumb chorus and an assy beat from Lil Jon, but Cube drops some knowledge.

If you can't tell, I think this record would have gone from good to great if Lil Jon would have not been allowed near it. All the tracks he has a hand in are the worst ones on the album, and it's a shame, because the rest of it is quite good. Cube's incapable of reliving his past glories, but I've got to hand it to him: he came back strong on this one.

"Spittin' Pollaseeds"
Posted by Wockenfuss at 1:24 AM