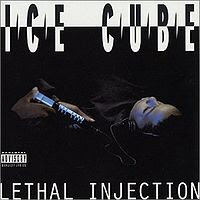 In his January 27, 1994 review of Lethal Injection, Rolling Stone writer Touré said "The most interesting question surrounding Lethal Injection is, has any rapper ever fallen off as hard as Cube?" Not a promising way to start an assessment of an album, and indeed, Cube didn't win over any critics with this one. He didn't win his hardcore fans over, either. I remember not even buying this one because a friend who I had shared an intense love of The Predator with told me not to bother. When I saw the video for "You Know How We Do It," it certainly didn't entice me to go against his advice.

The funny thing is, Lethal Injection has actually aged pretty well. While upon its release it seemed like Cube was jumping on the G-Funk bandwagon (and he was), it's now easier to look back on that time with some fondness and ingest the music for what it is, not what it was desperately trying to be. I think the biggest problem most Ice Cube fans had with this record was watching the guy who had prided himself on not following trends, instead opting to blaze his own trail, all of a sudden doing what sounded like a half-baked imitation of The Chronic. Not all of the songs here are so blatant with the mimicry, but some of 'em are egregious with it, and it tarnishes the overall sound.

In Cube's defense, dude had been churning out brilliant new music every year for about five years at this point; he was due to slip a little. And really, looking back on it, that's all he did. He slipped a bit. It was just the first time we had seem him do it, and it was hard to admit he was human. And really, it was just kind of disappointing.

"Really Doe" is noticeably less fierce than any other song that had opened an Ice Cube album, and it also ended his "payback" theme that had started up the previous three. Both not great signs. It's not a bad song, though. "Ghetto Bird" takes a slang term that Cube would have muttered in passing in the past and devotes an entire track to it. The droning synths make their first appearance, and the results are mixed. "You Know How We Do It" is really where you can pinpoint Cube's fall from grace. Its attempts to recreate the vibe of "It Was A Good Day" are thinly veiled, not to mention unsuccessful. Blah.

"Cave Bitch" tries to reinvigorate some of the rage from Death Certificate, complete with the Farrakhan speech at the beginning. It misses the mark, which is unfortunate, because the next track doesn't bring the flow back. Why Cube decided to do an eleven-minute version of "Bop Gun" is anyone's guess. But one thing's for sure: it's way too long, and it just seems like Cube wants to out-Parliament Dr. Dre or something. Instead, it throws a huge wrench in the middle of the record.

Things pick up after this, with the solid "What Can I Do?" and "Lil Ass Gee." "Make It Ruff, Make It Smooth" is confusing in its intentions, and just ends up being another phoned-in slow jams. Guest MC K-Dee's wack-as-fuck rhymes don't help. "Down for Whatever" has gained after-the-fact fame from its inclusion in Office Space, but it's always been one of the better tracks on this record. Slow as shit, but the lyrics are there.

"Enemy" keeps it going, sounding like a leftover from The Predator. It's a damn fine song. The same can't be said for the pandering of "When I Get to Heaven," which is almost every bit as bad as its name, but not quite. It's another slow one, and there's a few good lyrics here and there, but for the most part it's not great. Thankfully it's at the end.

So, yeah, not Cube's best effort. But like I said, it's a lot easier to listen to this album now than it was 15 years ago. It's still '93-era Cube, and there's some shit to get with. Just wish there was a little bit more.

"Really Doe"
Posted by Wockenfuss at 1:35 AM