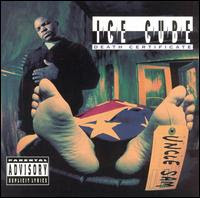 Well, here it is folks: the best hip hop album ever.

Yep, I said it. There's a handful of others that I consider serious contenders (Outkast's Aquemini, De La Soul's 3 Feet High and Rising, Raekwon's Only Built 4 Cuban Linx..., Dr. Dre's The Chronic), but when it comes down to it, this one wins. Ice Cube's evolution and execution on this record are unparalleled; it's like he cut his Jheri curl off and became the most brilliant rapper in history. There's not a weak moment on Death Certificate. Through 20 perfect tracks, he goads anyone who dares step up, and knocks 'em each down, one by one. And the best part is that he does it (aside from one incredible posse cut) all by himself.

Cube's growth as an artist is impressive for a few reasons. First, he was only 22 years old, and already possessed an understanding of the music (not to mention the world) that most rappers never achieve. Second, his entire persona shape-shifted so much in the span of a year and a half that he almost seemed to be a completely different artist. Not only had his skills on the mic somehow surpassed the already top-notch chops he showed on his first two solo outings, but he went from a kid on the corner who didn't give a fuck to a guy who was fed up with what he saw when he looked past that corner. Gone were the songs about playing dice. Instead, he ushered in an (what would end up being a short lived) era of angered obsession over the intricacies of what made him (and those around him) fuck around in that crap game in the first place.

This could have backfired enormously. Instead, it only further proved that Cube was exactly what he believed himself to be: N.W.A. and Public Enemy rolled into one, with the combined power of both. And while these tracks all have themes and messages of one sort of another (I should mention that they're not all "political"), they're also just incredibly great songs, which ends up being the reason that this album is better than all the rest. Cube dropped the Bomb Squad (another bold move) and teamed up with his homies, Sir Jinx and the Boogie Men (which featured DJ Pooh), producers who apparently were capable of making some insanely complex, yet ultra-catchy beats. I still can't believe they pulled all this together a mere 10 or 11 months after Kill at Will. It sounds like they worked on it for five years.

The album is divided up into two sides (remember when albums used to have those?), The Life Side and The Death Side. The Death Side comes first, with a really well-done funeral skit starting the proceedings after Cube states his thesis and briefly describes his mission. When, mid-eulogy, "The Wrong Nigga to Fuck Wit" kicks in, you know it's on. Cube had a habit of working the word "payback" into the first line of his solo records for a while, and this one constitutes the second appearance of that theme. "God damn it's a brand new payback" starts this one off, and then it's a flurry of verbal jabs, with Cube declaring that he "went to the shelf and dusted off the AK." It doesn't get much more awesome than that.

"My Summer Vacation" is a smart-as-shit narrative about gangs infiltrating middle America, with a huge bass beat that rumbles throughout. It makes a sensible prequel to "Steady Mobbin'" Cube's ode to starting trouble with his boys in the Lench Mob. It's probably the most "West Coast"-sounding song Cube had ever performed up to this point in his career, and the beat has a nice party vibe to it. After the hilarious "Robin Lench," Cube shows up at a nice young girl's front door for "Givin' Up the Nappy Dug Out," which contains such lyrical gems as "she keeps nuts in her mouth like the bitch was a squirrel." I can't tell you how much that riled me when I was a teenager. Eh, I'm not going to lie–I still think it's great.

"Look Who's Burnin'" logically follows that tale of indiscreet trysts, with its frank and cringe-inducing lyrics about STD's. I know, it sounds awkward. But the chorus is fucking sweet, and Cube nails the verses. "A Bird in the Hand" is the first track that nudges toward the darker songs that follow, a hyper-critical assessment of the then-current Bush administration and their failure to aid the inner cities. Again, the beat is just unbelievably awesome. "Man's Best Friend" equates Glocks with Lassie, offering that theory that guns are more reliable than pit bulls. Again, who the hell else was going to come up with this shit other than Ice Cube?

"Alive on Arrival" is maybe my favorite song from The Death Side, a first-person tale of a shooting victim and the shabby treatment he receives from the local ER. It ends with his death ("So at 10pm, I was Audi 5000"), and some words from Khalid Abdul Muhammad (Cube had recently joined the Nation of Islam).

"The Birth" opens The Life Side, and while things seem initially brighter, Cube doesn't waste any time in selecting a new target: the military. "I Wanna Kill Sam" is an incendiary criticism of military recruitment tactics and just a fucking sweet song in general. Cube saves the best line for last: "I wanna kill Sam 'cause he ain't my motherfuckin' uncle." Yeah, Cube. "Horny Lil' Devil" lets the white fellas know that the sistas are off limits (did I mention Cube had joined the Nation of Islam?), and though I should probably be offended, I really can't find any reason not to love this song.

"Black Korea," for being less than a minute long, sure seemed to cause Cube some problems. His attack on Korean store owners in the hood made a lot more sense a year or two later (after the L.A. riots), but I can see why people think it's harsh. Whatever. "True to the Game" calls out the "Oreos," or those blacks that dare hang out with white people (Cube joined the shit out of the Nation of Islam). My least favorite song on the record, but that's mostly because it's a bit slow for my taste.

"Color Blind" is one of the all-time great posse cuts, an anti-gang (yeah, I know–call Cube anything but consistent) team-up that features members of the Lench Mob, as well as WC and the Maad Circle. And you know who was in the Maad Circle? Coolio. Yep, Coolio's on this track. And you know what? He's pretty badass on it, so step back. I used to rewind "Color Blind" over and over when I had this tape in my car in high school. The song is arranged so the rappers overlap slightly with each other, and it's sweet.

"Doin' Dumb Shit" is a back-in-the-day track that is probably the most light-hearted of the bunch here, and just shows one more side of Cube that we may not have known was there. And of course, he pulls it off with ease. "Us" is another one of my favorite songs here, and another one that no one could have seen coming. If it seemed like Cube was laying into everything and everyone except his own, this is the track that squashes that argument. I can't think of any other track in hip hop that has so brashly held a mirror to its core audience. Again, Cube nails it.

I'm not going to get into the whole Ice Cube/N.W.A. feud that was reaching a fever pitch around the time of this album's release, but just know that Cube was due for a response to his former bandmates. "No Vaseline" not only settled the issue, it proved Cube the undisputed champion, and nothing was ever heard about it again. "No Vaseline" is the dis track to end all dis tracks, a meticulous disassembling of each individual member of N.W.A. in a fashion that only a former friend could pull off. It is incredible.

Wow, this has gone on way too long. As usual, I could go on forever. I won't. If you don't own this, you should. I'm over 15 years into listening to it, and I still love it. Yeah, Cube.

"Steady Mobbin'"
Posted by Wockenfuss at 2:16 AM

The best hip hop album ever? That is a tough call to make. Would it make my top 10? Absolutely. Top 5? If not, its pretty darn close. "Perfect" is a word I would use to describe this album and I mean that quite sincerely. This is one of those records that blew me away when I first heard and 18 years later it has not lost one bit of what made it so great to my 12 year old ears. From the concept to the production to the rhymes to the artwork, everything comes together to show just how effective hip-hop can be when done well. Ice Cube was in his prime here and somehow sounds even angrier than he had ever been before. Without getting into a song by song breakdown I can easily say that every single song here is absolutely amazing. Side B for me is really where things get out of control. "Horny Lil' Devil," "Black Korea," "Color Blind" and "No Vaseline" are just unreal in how amazing they are. "No Vaseline" may be the greatest rap song ever. It is by far the greatest "diss song" ever released. With just two lines Cube destroys NWA's credibility: "Yella Boy's on your team so your losin'/Hey yo Dre, stick to producin'." That is simply unfair. I could go on and on. I am pretty sure that I was convinced that this was the number one rap album ever until Wu-Tang entered my life. It still may be.