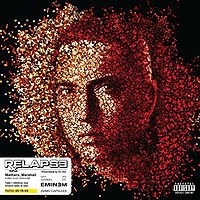 I am still struggling to figure out what I think about this record. I initially loved it, then hated it, and now I'm somewhere in the middle. And this has all happened in the last week.

I think when I first listened to it, I was simply excited at the prospect of a new Eminem record. It has a been a while (not counting some spotty guest appearances and the underrated Re-Up compilation) since we've seen Slim Shady, and I know I wasn't the only one who was incredibly curious about what he was going to attempt to pull off in 2009. I heard "Crack a Bottle" when it leaked; tried to like it and didn't. I watched the video for "We Made You" when it came out; hated it hard and began to fear the worst. Watched the video for "3 a.m." after it premiered, then wondered if there wasn't going to be any middle ground between the sloppy pop numbers and the decapitation fantasies.

There isn't. And honestly, that's what I'm starting to appreciate about this record. Mr. I-Don't-Give-A-Fuck really seemed like he did give a fuck on Encore, pandering to fuckwads with unforgivably mouth-breathing tracks like "Ass Like That" and "Big Weenie," and it was depressing. Of course, part of this is my fault: I've always given Eminem more credit than he deserves, and been quick to look the other way when he phones in guest spots and dumbs down tracks looking for quick hits on his records. On Relapse, any signs of cutting corners for the benefit of the mainstream have already been exposed. The first two aforementioned tracks are it (with the exception of "Beautiful," but I don't see that being a single), and they stick out like sore thumbs in this collection of dark moroseness.

So, let's talk about what doesn't work on this record.

I thought "Just Lose It" was about as bad as Em's single-to-kick-off-the-album was going to get, but "We Made You" has taken things to a new low. Never has he sounded more out of touch, bored, and guilty of fucking up the formula that he created. This track is the antithesis of everything that made "The Real Slim Shady" and "Without Me" so effective. It's just embarrassing.

Dr. Dre's beats on this album are, with a few exceptions, conspicuously generic. They're minimalist, which I like, but after a while you begin to miss the layered grandeur of his usual process. Eminem can usually fill out any track on his own, but some of these feel a little hollow.

Eminem starts with a horrorcore-ish track (3 a.m.), and then beats the concept into the ground. Don't get me wrong, I'm happy to hear that he's up, around, and killing again, but his hatchet fantasies become stale real quick. The rhymes are still there, but the subject matter is no longer shocking. It hasn't been for a while.

And the accent. Oh, the accent. I don't know what got him started on the kick (it was Encore-era, but apparently it wasn't drug-induced, because he's still at it). It's vaguely foreign, slightly irksome, and on almost every track on this album.

So, what does work on this record?

Sobriety has certainly sharpened the dude. His rhymes are filler-free, and even though some of them are gross-out-centric, you can't argue with the rhyme schemes. And overall, this doesn't sound like anything he's ever done before. People keep wanting this to be the return of The Slim Shady LP, but it's nothing like that. It's darker, a bit less varied, and should stand alone for what it is.

The lack of guest spots (no D12!) is a good move. Dre makes a couple of appearances, and 50 Cent is on "Crack a Bottle," but that's it. And the track that Dre and Em duet on ("Old Time's Sake") is a good one. But I'm a sucker for hearing Dre recite rhymes that Eminem clearly wrote.

It really does seem that, to the extent that this is possible, that Eminem is back to doing what he wants and not worrying about it. Yeah, there are the singles, but otherwise he seems fairly freed up here. And shit, I am just happy the dude's rapping again. It's weird: this is more or less the same shit he started out rapping about ("Scary Movies," etc.), but he does sound more grown up somehow. And that ain't bad.

"Underground," the final track on the record, is the best song he's done since "Soldier" from The Eminem Show. How he takes the awkward beat and fully destroys it is beyond me, but he does. And he uses his real voice. It's fantastic.

Overall, I'm still forming my opinion about this one, and I think only time will tell. I'm not listening to it as much as I hoped I would want to, and that's not a great sign. We'll see where it goes from here.