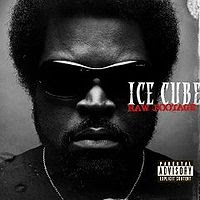 I just bought this CD a few weeks ago, so my commentary may be a little limited. That may also be due to the fact that after three listens to this album, I was having a hard time finding anything to like about it. I'm going to try again, but Cube's really testing my limits here.

Featuring Young Jeezy on the first track soured the deal for me from the get-go. "I Got My Locs On" is a terrible, terrible song, and Young Jeezy is a terrible, terrible rapper. Ugh. "It Takes a Nation" presents itself next, and should have, by any logical stretch, been the opener. So, it picks things up a little, and Cube drops some nice lyrics. "Gangsta Rap Made Me Do It" is some self-serving filler, and "Hood Mentality" isn't quite as generic as it sounds, but Cube struggles to pull off his ear-to-the-streets persona this far into his post-Are We There Yet? career.

"Why Me?" features Musiq Soulchild sucking up a chorus, and Cube trying to hit an emotional note. "Cold Places" and Jack N the Box" are both nondescript, and "Do Ya Thang" is embarrassingly phoned-in. "Thank God" has Cube declaring that "The gangsta's back," but again, he barely seems to believe it anymore. "Here He Come" is a terrible song, but is made a bit more tolerable by the guest verse by Cube's son, Doughboy.

"Get Money, Spend Money, No Money" isn't quite as dumb as it sounds, but almost. "Get Use to It" is a lazy posse cut featuring WC and The Game, and "Tomorrow" tries to invigorate the proceedings and almost does. "Stand Tall" is saptastic, and "Take Me Away" closes things out on a sparsely weak beat. And really, that's most of the problem with this whole album: the beats are bunk as fuck. None of them stand out, and it doesn't leave Cube much to work with.

Maybe I'm judging this one too harshly too quick, so I'm going to try and give it another go, but right now that seems like work. I just hope this isn't Cube's last album, because it would be a sad one to go out on.

"Gangsta Rap Made Me Do It"
Posted by Wockenfuss at 2:33 AM