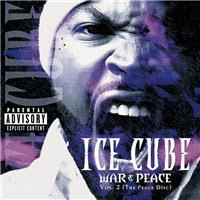 While it looks like it took Cube two full years to roll out the second part of the War & Peace saga, it was really more like a year and a half. Little bit less. Still, it took a while. In keeping with the loose theme he was working with, this album does seem to be a little less pissed off, and a leans a bit harder on the club tracks. That's not always a good thing, but if you count "You Can Do It" as one of your guilty pleasures (which I almost do), then it's fine.

Does anyone have a count on how many songs Ice Cube has used the lines "I started this gangsta shit/ And this is the muthafuckin' thanks I get?" in? It's at least three, but I bet it's more. Either way, that's the basis for "Hello," the opening track here that features Cube's old N.W.A. cohorts Dr. Dre and MC Ren. Thankfully there's no Snoop, but where the fuck is Yella? I like this track, but that's mostly because I'm an undying N.W.A. fanboy who gets giddy when these three dudes are in the same area code. The track is pretty good though, I guess.

While The War Disc was 18 tracks deep with one skit, this one houses 17 tracks, four of them being skits. So, there's not as many songs, but it doesn't feel short. However, the skits (or, excuse me, "inserts")are rehashed versions of shit done elsewhere, and completely unnecessary. So, they're better off skipped, but that's the case with most skits in the last decade.

I'm not trying to get negative on this one though. There are some cool songs here. "You Ain't Gotta Lie (Ta Kick It)" brings back Cube's sense of humor (finally) and is vaguely reminiscent of some of his early stuff. Vaguely. "24 Mo' Hours" is a basic one, but it doesn't make for a bad three minutes. "Gotta Be Insanity" is one of the better tracks here, featuring a bouncy beat that doesn't sound as generic as some of the others. "Roll All Day" is borderline bullshit, but it's too egregious.

While Cube is obviously still capable of kicking real rhymes (his verses on "Hello" are diggy dope), there are some songs on this one that feel really dumbed down, often in his verses, and always in the hooks. "The Gutter Shit," "Supreme Hustle," "Until We Rich," and "Can You Bounce?" are disappointing, featuring Cube phoning in lyrics that should be coming from the mouths of rappers that couldn't hold Cube's loc's. Hearing him say "Make it jiggle, wiggle wiggle" is just embarrassing. I will never understand why he felt the need to resort to this pandering-to-the-lowest-common-denominator bullshit. It's not like he needed the money. Dude was a full-on film star by this point. But I digress.

Luckily, the album wraps up on comparably strong note. "Record Company Pimpin'" rides a smooth beat and features Cube laying into the major labels, asking "Do I take it in the rectum just to rock The Spectrum?" Finally, some of the old Cube shines through. "Waitin' Ta Hate" contains one of the better beats on the record, and Cube getting nice and pissed at–who else?–the haters. Yeah, it's been done, but he does it well. "Nigga of the Century" doesn't quite live up to its hyperbolic title, but the idea is a great one, and Cube brings some solid lyrics to close out the album.

I probably don't like this one quite as much as Vol. 1, but it makes a nice Cube-comeback companion. Who knew that after this one he would have to come back again?