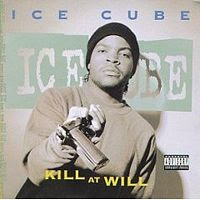 Kill At Will is everything that a well-made EP should be.

Released in the same year as AmeriKKKa's Most Wanted, this seven-track quickie was just enough to keep Cube's momentum going, and worked to tide fans over until his next release. His song choices were smart as shit: a remix of one of the best songs from his debut; a full-length reworking of one of the shorter songs on his debut; an addendum to a previous skit; three new tracks (none of which sound anything like the other); and what I consider the best shout-out song in rap history. It's all packed into just over twenty minutes, and it's fantastic.

The "Endangered Species (Tales from the Darkside)" remix is a little strange. The beat's different (duh), but while the lyrics remain the same as the original version, it seems to be a different recording of both Cube and Chuck D's performances. Whatever; it's still great. "Jackin' for Beats" is a fun little jab at sampling, with Cube dropping some sweet lyrics over other people's tracks. I'm glad it's not longer than it is, but it's a good one. "Get Off My Dick and Tell Yo Bitch to Come Here" was less than a minute long on Cube's previous record; here it's expanded with some hilarious verses and a brand new beat.

"The Product" is a definite precursor to Cube's next record, Death Certificate. His lyrics are sharper than ever, and the narrative tale is smart as hell. It's probably my favorite song on this album. "Dead Homiez" was a bold move at the time this record was released. Cube had never been anything but hard as fuck, and I can't believe he didn't worry about dropping his guard too early. But, he pulled it off. The song's a little slow for me, but the lyrics are incredible:

I remember we painted our names on the wall for fun
Now it's "Rest in Peace" after every one
Except me, but I ain't the one to front
Seems like I'm viewin' a body after every month

After the short "JD's Gaffilin' (Part 2)," Cube wraps things up with the shout-out track to beat all shout-out tracks, "I Gotta Say What Up." Proof that he could even make a tired and self-aggrandizing hip hop exercise dope as fuck. My favorite part? When he says "Don't laugh ho's/ I'm down with The Afros."

Yep, this is right up there with NWA's 100 Miles and Runnin' as one of the best hip hop EP's ever. But still, no one could have imagined what Cube had up his sleeve for his next release.

"Jackin' for Beats"
Posted by Wockenfuss at 1:24 AM

Remember when I said that Cube terrified me? This album cover only confirmed what my young brain already thought: that Ice Cube would gladly kill me if I looked at him wrong. While very short, this is still a very effective record. While "Jackin For Beats" has never been one of my favorite Cube songs, I appreciate it for its concept. The fully realized version of "Get Off My Dick..." is great. "Dead Homiez" is still effective today, but upon its initial release there was nothing like it. I thought it was genius and Cube pulls off exploring emotions while still coming off like he will gladly beat you down in an alley. "The Product" for me has always been the forgotten gem from Cube's early work, one of his best all-time tracks that serves as a perfect segue between his street tales of his first album and his takes on politics and community that would drive "Death Certificate."