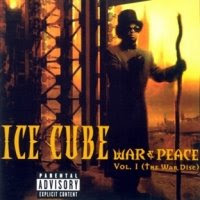 Other than the frustrating missed opportunity that was the Featuring...Ice Cube album, this was Cube's first release since 1994, and his first album of new material since 1993. Cube wanted to come back big, and one album wasn't going to cut it. So, he set out to put together what seemed like a Death Certificate-type project, though this time, instead of being two separate sides (Life and Death), it would be two separate albums (War and Peace).

It certainly sounded ambitious, but considering that Cube hadn't put out a record in five years, you had to figure he had some shit built up. When this disc dropped and contained 18 tracks, 17 of which were actual songs, it became clear he wasn't fucking around. This is a long album, and it's actually pretty damn good.

But, I should qualify that. There's the first wave of Cube (AmeriKKKa's Most Wanted - Lethal Injection), and there's the second wave of Cube (this album-present). Standards for the quality of his music may have dropped a bit when you're talking second wave, because it's a completely different Ice Cube. Though this album and the one that followed it seem to have a concept surrounding them, it's not nearly as cohesive as the one that engulfed Death Certificate, and even that one was pretty loose. Cube's got some angles here, but don't get it twisted: it's more a collection of singles than a rap opera. Having said that, this album was definitely a nice surprise, because I think we all expected it to suck. And it doesn't.

"Ask About Me" is a nice welcome-back to Cube from himself, and you learn that he's apparently calling himself the "Don Dada" or "Don Mega" now, and also talking about hustling. Get used to it, it's the new Cube. If you can look past this bullshit, you can learn to like this record. This is made even more clear by "Pushin' Weight," which I think is a great song, though it does introduce us to Cube's apparent new prodigy, Mr Short Khop, who is spotty at best. Khop shows up on a bunch of songs on this disc, though is nowhere to be seen on Vol. 2. Huh.

"Fuck Dying," though it unfortunately features Korn, also leads with one of Cube's funniest skits, in which he threatens to fist fight the devil (or maybe it's the grim reaper?). And the song doesn't end up being too bad. And honestly, that's what I have to say about a lot of the tracks on this album. They're good. Not great, mind you, but they could be a lot worse. "Once Upon a Time in the Projects 2" is blasphemy and should never be listened to, but if you avoid that you'll be in good shape.

You also have to sort of look past song titles like "Ghetto Vet," "Cash Over Ass," and "If I Was Fuckin' You." Yep, that shit's stupid as all get-out. But it's Cube's attempt at remaining relevant, and he should be afforded that. In between those generic missteps, he still raps his ass off. You just have to adjust your expectations. If you go into this one not expecting a whole lot, you'll be pleasantly surprised.

"Pushin' Weight"
Posted by Wockenfuss at 1:48 AM