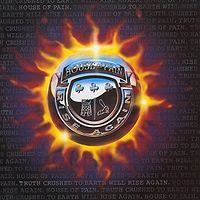 While House of Pain tweaked their sound considerably on their sophomore effort, their third (and final) release finds them sticking with the dark and rugged sounds that suited them so well on Same As It Ever Was. I have to admit, I never really gave this album a fair shake–a lot of the tracks seemed rushed to me, and though I've listened to it quite a bit over the years, this is definitely the HOP record I'm the least familiar with.

I've been rocking it pretty steady for the last few days, getting to know it again, and while it's not their strongest effort, I have to say: I've really been getting into it. Everlast is in full-on dark mode on these songs, and though it seemed impossible, his voice is even more gravelly and gritty on this one than it was on their second album.

"Fed Up" is a great single, a no-tricks track that finds Everlast getting serious but still kicking out some witty lyrics. The same can be said for a lot of the other cuts that Everlast handles on his own. "Earthquake" and "Shut the Door" are both dusky but infected with a little bounce, and they're solid. "Choose Your Poison" is a modified party jam, a track that features a slightly restrained beat and some of the best rhymes on the whole set.

Everlast is never short on the hooks, and he pulls off some great ones here, even working some singing into the mix (foreshadowing, anyone?). The chorus on "Fed Up" is up front and harsh, and certifiably catchy. "X-Files" features a doubled-up Everlast getting philosophical, which is a far cry from the House of a few years prior. "No Doubt" is a nice little track, proving that even a phoned-in chorus can work well enough.

My only real beef with this album: not enough Danny Boy. He's only on two songs, and that's just unacceptable. He kicks a solid verse on the opening "The Have Nots," but then doesn't show up again until he spits some lackluster bars on "Choose Your Poison." It's frustrating, but I get the feeling that he might have been going through some rough shit at the time. Speaking of good ol' Danny Boy, if you want to see one of the most mismanaged Wikipedia pages ever, check his out.

So, that ends the House of Pain trilogy. A few closing things: La Coka Nostra looks terrible. But, House of Pain is slotted to play this year's Rock the Bells, so that's something. I'd see the shit out of a House of Pain reunion if they came through town.