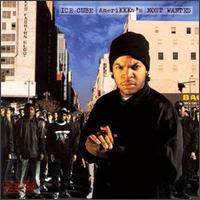 Settle in, folks. There's going to be a whole lotta Cube comin' at you for the next week or so.

It is crazy to consider that Ice Cube is still in his 30's. When O'Shea Jackson hits the big 4-0 next month, he should be able to rest easy, knowing he's done as much for hip hop as anyone who's ever picked up a mic. But you know he's going to keep doing shit. Anyway, the point I'm trying to make is that when Cube dropped his first solo record (after knocking out a few with N.W.A.), he wasn't even of legal drinking age. When I was 20, I was pumping kegs and half-assedly attending community college. This dude was already at the point where he could get Public Enemy to do guest spots on his record.

You can talk all the shit you want about Ice Cube's questionable forays into the world of film (I'm right there with you), but you'll always have a harder time poking holes in his approach to the music. Yeah, he's made a few clunkers (don't worry–I'll be breaking those down), but I've never gotten the sense that he was phoning shit in. Maybe I'm just such a Cube fanboy that I allow him to pull the wool over my eyes, but I'm always willing to give his records a shot. And you want to know why? Because at one point, he was the best rapper on the planet.

Which brings us to where it all began for Cube on the solo creep, the infamous AmeriKKKa's Most Wanted. I've been listening to this record off and on for almost two decades now (oh, I'm old), and I still get a charge out of it when it finds its way into my car stereo or iPod. It's that good. N.W.A. may have pioneered Gangsta Rap, but Cube managed to jettison the genre five years ahead in the span of one year and one album. It's hard to explain how mind-blowing this record was when it came out, but really: it sounded like nothing the rap world had ever heard before.

Of course, props on that front must be given up to The Bomb Squad, the East Coast team that oversaw the production of this much-anticipated album. The beats on this record are virtually flawless, all characterizing a mood that seems to fit the lyrical content of the tracks perfectly. Ostensibly, the beats aren't to fancy, but strap the headphones on and give this one a solid listen–there's lots of little asides and blips that add texture without crowding the main portion of the track. Cube's never been one for a lot of trickery with the vocal approach, so the music aligns with his method snugly.

Gangsta Rap wasn't on the list of acceptable music for my 14-year-old ears, so when I managed to purchase a copy of this on cassette without my mom knowing, I had to keep it stowed away, only breaking it out to discretely slide the tape into my Walkman. Of course, this only made me like it more. The first time I heard "Better off Dead," the dead-man-walking skit that opens the album, I didn't know what the fuck was going on. And then, OH, they're putting Ice Cube in the electric chair. Of course they were. But before he died, he had to get one last jab in: "Fuck all y'all."

Then "The Nigga Ya Love to Hate" kicked in, and all hell broke loose. It made his verse on the title track to N.W.A.'s Straight Outta Compton seem like the words of a precocious youth. Cube had clearly spent the last year compiling a mental list of people he planned to pick off. Among them: "The police, the media, and suckers that went pop." This song also contains what is one my favorite Ice Cube couplets: "Soul Train done lost they soul/ Just call it Train 'cause the bitches look like ho's." You got that right, Cube.

The title track continues to set the pace for the rest of the record, slowing the tempo a bit but remaining rough with the lyrics. "What They Hittin' Foe" is a brilliant minute and a half, a little tale about Cube "fucking around in a crap game." "You Can't Fade Me" and "Once Upon A Time in the Projects" make for a classic one-two punch, both telling tales of Cube's imagined life on the streets. Both are patently offensive, and it makes them all the better. If you get your undies in a bunch when you hear Ice Cube talking about how he needs to "kick the bitch in the tummy," you're missing the point completely.

"Turn off the Radio" and "Endangered Species" take on different issues, but they're both frantic in their approach. Great songs, and if you listen close at the end of "Radio" you can hear a young Del tha Funkee Homosapien. And of course, Chuck D's verse on "Endangered Species" is mighty tight. The next three tracks are more fun. "Gangsta's Fairytale" features Cube thugging out some nursery rhymes; "I'm Only Out for One Thang" gets sloshy with Flavor Flav; and "Get off My Dick and Tell Yo Bitch to Come Here" sets the male groupies straight while having some fun at their expense.

If this record has one minor flaw, it's that it doesn't end as strong as it begins. "Rollin' Wit the Lench Mob" is fantastic, but "Who's the Mack" almost slows things down a bit too much. It's a great song, but it's hard to know where to put it. "It's a Man's World" features Yo-Yo, who I love, but at close to six minutes, it drags towards the end. Luckily, "The Bomb" wraps things up nicely, barreling through some crazy verses and coming as close to a dance beat as Cube gets on this record.

I knew I was going to end up writing too much about this record. But fuck it: it's AmeriKKKa's Most Wanted, for cryin' out loud.

Ice Cube in Rotterdam, 1991
Part One
Part Two
Posted by Wockenfuss at 2:24 AM

What a big brother you are. Still to this day when I hear this record it reminds me of being in grade school. And loving it. I can't describe how terrifying I found Ice Cube when I was young. He was so angry and real that I believed him when he said that "when I got a sawed off bodies are hauled off" (one of the best rap lines ever). Anyways, this is one of those rare rap records that really has nothing wrong with it. True, it slows a bit towards the end, but it only seems that way because Cube has hit you with about 9 of the greatest rap songs that you have ever heard. And it is so true that this album was way ahead of its time, from the beats to the intricate style of his rhymes. God, Cube was unbeatable in his prime.