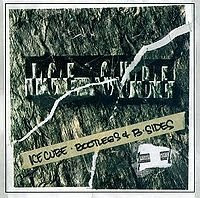 While this record has since been rendered somewhat superfluous by the re-released versions of Cube's first four albums, which contain most of these tracks, it's still nice to have all these cuts in one place. I would consider this album primarily a hardcore fans-only collection, because it's an uneven batch of songs, and certainly doesn't stack up well next to Ice Cube's actual albums. But, there's some cool shit here.

The title is a bit misleading, because there aren't any actual bootlegs here; in fact it's all b-sides (some of which are remixes) and a few random cuts. "Robbin' Hood (Cause It Ain't All Good)" starts it off strong, though if Lethal Injection left a bad taste in your mouth, this beat won't help wash it out. Still, it's a better song than some that made it onto that album. The "What Can I Do?" remix brings a more bumpy G-Funk than the original version, though it doesn't really improve it.

"24 Wit an L" is a Predator-era b-side, if memory serves me correctly, and it's the best song on this album. Not sure why it wasn't deemed album-worthy. I should note that, annoyingly, this album isn't chronological, so the vibe shifts around quite a bit. But the G-Funk still pervades most of it. The "You Know How We Do It" remix is actually a bit better than the original, but "2 N the Morning" goes to the "Atomic Dog" well and doesn't do much.

The video version of "Check Yo Self" is here, followed by "You Don't Wanna Fuck Wit These (Unreleased '93 Shit)," a bouncer that knocks pretty hard. Another one of the better tracks here. The "Lil Ass Gee" remix isn't too notable, and "My Skin is My Sin" is another Lethal Injection-era G-Funker, featuring the spotty WC. Cube's lyrics are pretty dope on that one, though. It's followed by the "It Was A Good Day" remix, which I inexplicably like quite a bit.

"U Ain't Gonna Take My Life" is a Predator-era b-side, and though you can feel the funk creeping in, it's still a decent little song. The "When I Get to Heaven" remix is completely unnecessary, and the song that follows it, "D'Voidofpopniggafiedmegamix," is a weird but somewhat fun mash-up of a bunch of Ice Cube songs. A nice one to end on, but again, it's really for the completist or the harder-core of fan. Of course, I include myself in that group, so here I am.

Sadly, this would be the last Ice Cube record for a while. And there's not even really any new material on it. Yep, Cube was becoming an actor.