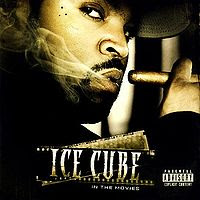 Somewhat surprisingly, there is a lot I like about this compilation, and I think it's a nice addition to his discography. I'll explain why in a bit, but first let me explain my only major beef with this collection: it's not in chronological order, let alone any discernible order at all.

When are record companies going to pull their heads out of their asses and realize how much sense it makes to sequence albums like this from earliest to newest? Ugh. Thankfully, with patented iTunes technology, I can make my own mix. Don't think I won't.

So, yeah, that part is ridiculous. Here's why this album is a must-have for Cube fans: it contains a generous amount of non-album tracks. Let's be honest: I was never going to buy the Player's Club soundtrack. And while the two songs from that movie represented here are pretty bad ("We Be Clubbin'" and "You Know (I'm a Ho)"), I'm happy to have them. Same with "Anybody Seen the PoPos?" from xXx: State of the Union and "$100 Dollar Bill Y'all" from All About the Benjamins. Again, not great songs, but I can put up with a lot from Cube, and I'm happy to have them.

The gems here, of course, are the earlier tracks. "How to Survive in South Central" from Boyz n the Hood is vintage Cube (literally), and fucking rules. "Trespass," from the movie of the same name, features Ice-T stepping his game up to match verses with Cube, and it's sweet. "Higher," from Higher Learning, is rare '95-era Cube, and finds him in a good spot, though it's very clearly written for the movie.

"Natural Born Killaz," Cube's '94 team-up with Dr. Dre for the Murder Was the Case soundtrack is here, and so is the goofy-fun title track from Friday. There are some album tracks here: "The Wrong Nigga to Fuck Wit," "Ghetto Vet," and "You Can Do It" are included, but if that's all you're re-buying, it's a decent ratio.

My only recommendation regarding this disc: the last track, "Right Here, Right Now," from Blade II, must be avoided at all costs. Cube inexplicably teams up with Paul Oakenfold, and it ain't pretty. You've been warned.

Otherwise, it's perfect for the Cube completist who wants to save himself some money.

"Trespass"
Posted by Wockenfuss at 2:02 AM