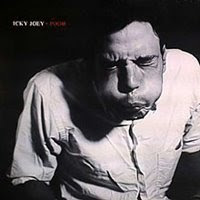 I'm fairly certain I was introduced to Icky Joey through the Teriyaki Asthma Vol I-V compilation that C/Z records put out in the early 90's. I consider it a terrible tragedy that the band didn't receive more widespread recognition, but maybe they were big in Seattle and I just never knew about it. I think they were more of a side project than anything, but these songs aren't throwaways. I've owned this album in one form or another (used to have the CD, re-purchased it on vinyl last year) for years, and I can still listen to it from front to back.

I can see why Icky Joey wouldn't be everyone's cup of tea, but once you settle into their sound, it's hard not to love it. There's a bitter current that runs through some of the songs on this record, a sarcasm (check out "You Are the World") that is both hilarious and mean. I love it. But, the majority of the tracks thrive on goofiness and in-jokes, blurting ridiculous lyrics over the crunchy guitars.

I'd like to single out some of the best songs on this album, but when I listen to this record, I usually listen to the whole thing. Both sides are equally strong, with the second getting a little bit more wacky than the first. Tracks like "Smokin' the Devil's Bud" and "Medusa Anus Eye" are completely ridiculous and incredibly fantastic. And "Fat" and "Dog Lady" work that funny/mean angle really well. You get the feeling that this band was fueled by a lot of beer. Or maybe just a great deal of immaturity. Either way, it works.

If you ever see this album in bargain bins (and you will), do yourself a favor and pick it up. It's more than worth a few bucks.

"I'm Liberace Now"
Posted by Wockenfuss at 2:35 AM

Wow. Icky Joey. One of those bands that I unabashedly love. I, like you, could never fathom why they were not much more beloved, either in their time or now. "Icky Joey" has to be one of the all time best band names. "Pooh" is perfect album title, especially for this album. And I can't explain why, but I have always loved the cover art. Also, like you said, every song on here is pretty awesome. They do sarcasm really well, which in music is sometimes hard to pull off. Check the genius lyrics from opener "Zara:"

"Father's in television
isn't that interesting?
He's gonna put you through
the most expensive private school
how's it gonna help when you've got no soul?
there's not much demand for selfish assholes"

Awesome. Although the music is clearly '91 Seattle, Icky Joey has somehow aged better than many of their contemporaries. Nice score on the LP. I think I somehow own your CD. Sucker.

Actually the CD is not from 1991 although that was when it was released. If you read the back of the CD is says that it was recorded in 1989.