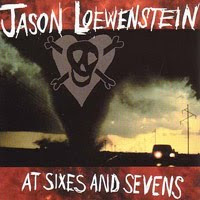 I'm doing this one slightly out of order, as I always forget that Loewenstein's name has that pesky "e" in it.

I've been an on-and-off fan of Sebadoh since I bought Bakesale in 1994, and although I certainly enjoy Lou Barlow's brand of oft-timid rockery, I was always drawn to Loewenstein's contributions to the band, especially "Zone Doubt" from 1996's Harmacy. I love that song. I may always love that song.

So, when I randomly came across this solo effort some years back, I snatched it up. And lo and behold, it's chock-full of songs that are a lot like "Zone Doubt." It's home-recorded, dude plays all the instruments, and the songs are solid. My kind of album. Loewenstein could be accused of keeping things a bit 90's, but I actually think that's part of what's great about this record. The guitars are warbly and thick, his vocals are double-tracked and slinky, and the lyrics are great.

He'll always be thought of as the dude from Sebadoh who's not Lou Barlow, and that's a damn shame. This is a ruggedly raw collection of songs, and makes a great companion to the fire he started on Harmacy years earlier. Rock it.

You can listen to "Casserole" and "Circles" here.
Posted by Wockenfuss at 1:36 AM