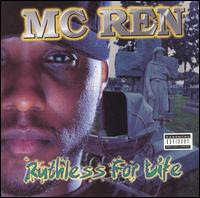 It's a damn shame that this is the only MC Ren album that I have on CD or LP. I'm pretty sure I still have my cassette copies of Kizz My Black Azz and Shock of the Hour, but I have yet to pick them up on more legit formats.

And it's not that I don't dig Ren when he's on the solo creep. I just dig him more when he's with N.W.A. When Ren made music with Dr. Dre, there was always that little something extra in both his delivery and his content. When left to his own devices he's a fine straight-up gangsta rapper, but he has trouble getting much farther than that. (For more on this phenomenon, see Snoop Dogg.) Still, dude's got a great voice and knows how to put together a song. His solo stuff just never has the same "oomph" as the shit he did with Dre.

Still, this album is good for what it is. And when Ren recruits other rappers to do guest spots with him, it seems to motivate him to step up his game a little bit. So, the tracks here with Eightball & MJG and Ice Cube are solid. And when he doesn't get too hook-heavy, the rest of the album ain't bad either. It's just rough trying to get too excited about tracks like "Who Got That Street Shit" and "Pimpin' is Free." Ren's covered the topics before, and he doesn't have a whole lot more to say about it.

Still, it's Ren. And I love Ren. So I give him the benefit of the doubt.

"Ruthless for Life"
Posted by Wockenfuss at 1:35 AM