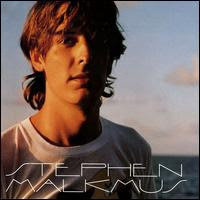 Before I start fawning over Stephen Malkmus's solo records, I want to state my position clearly so there's no mistaking how important I feel this guy is/has been to rock music.

I think when people talk about the sick beast that is indie/alternative/whateveryouwanttocallit rock, there should be a few names that rise to the top above all others, for both their contribution to the form and their consistency through years of output. We could talk forever about what constitutes indie rock, but I'm talking mostly guitar-driven un-mainstream rock here. The people who immediately come to mind for me are Black Francis/Frank Black, Thurston Moore/Sonic Youth, and Pavement/Stephen Malkmus. They're all similar in a lot of respects, and I won't go into it, but just know that I think Malkmus deserves as much credit as those guys for putting out some of the best and most important music of the last twenty years.

So, yeah, that's where I'm at. I'm a fan. Not obsessive, but I listen to Malkmus and Pavement a lot. In fact, I wish we were going through Pavement's records first, but alphabet be damned. Regardless, it seems that Malkmus and his music are divisive. I know plenty of people who can't get past his singing style or the fractured (seeming) randomness of some of Pavement's more exploratory jammers. I feel bad for those folks, because Malkmus is a great artist to be a fan of. Dude's consistent, releases tons of albums/songs/singles, and is just a brilliant songwriter. And he's still going.

This is his first post-Pavement solo effort, and I view it a lot like Frank Black's first post-Pixies solo album. It's certainly different, but Malkmus (like Black) was the main songwriter in his previous band, has a unique singing/songwriting style, and didn't waste too much time in between projects. So while it doesn't sound like Pavement, it doesn't not sound like Pavement. There's more interplay with the guitars (even though Malkmus is playing all of them), and just a more steady vibe in general.

As usual, Malkmus covers all the bases. "Black Book" opens with dark, thick, rock; "Phantasies" follows it with a peppy jangle and a catchy-ass falsetto hook; "Jo-Jo's Jacket" is a straight-ahead driving rocker with awesome lyrics about Yul Brynner. The record just builds up steam from there, running through the undeniable sweetness of "Discretion Grove" to the uncharacteristically linear "Jenny & The Ess-Dog."

Tracks like "Pink India" and "Trojan Curfew" (which sounds like Terror Twilight-era Pavement) take some patience, but if you've got it, it's worth it. "Deado" is a great closer, a song that finds Malk sounding more like Beck than he ever had or would. And I'm OK with that.

A great start to a solo career, I gotta say.

"Discretion Grove"
Posted by Wockenfuss at 1:45 AM