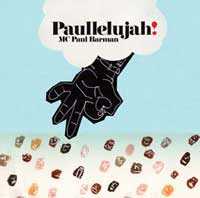 After dropping a pair of stellar 12" singles ("How Hard is That?" in 2000 and "Cock Mobster" in 2001) as quick follow-ups to his debut EP, MC Paul Barman was poised to blow us away with his long-awaited full-length. I was ready. Ready to declare it album of the year.

I couldn't do it. While Paullelujah! has moments of brilliance that served to remind me of why I was growing ever more fond of Barman as an MC, there were also many moments that just left me befuddled. The album starts strong, with the title track and "Cock Mobster," and keeps going fairly steady with the easiness of "Old Paul" and the comparative chaos of the fine "Bleeding Brain Grow."

Things get progressively disjointed after that, with Barman sounding like he's trying to squeeze his flows into beats that aren't very well suited to him. By the time the record ends, he's doing this free-form beatnik shtick that is frustratingly devoid of rhymes or any other reason to listen to it more than once.

I don't hate this record. In fact, I still listen to it from time to time. My mistake was expecting so much from it. I've learned to like it for what it is, and I actually think it sounds better now than it did when it came out. Maybe it's a testament to Barman's skills that it's taken this long to grow on me. Maybe I've just gotten over my initial disappointment with it. Either way, I'm happy that he put out a full-length at all. He's supposed to have another one dropping soon. Be on the lookout.

"Bleeding Brain Grow"
Posted by Wockenfuss at 1:19 AM