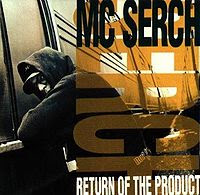 It must have driven Serch crazy that this record didn't make him just blow the fuck up. Because this album is great. And yeah, I'm saying that as a fan of 3rd Bass and early-90's hip hop, but this is a collection of songs that deserves to be mentioned in any conversation about the best that hip hop had to offer between '90 and '94.

Serch is out of his head with lyrics throughout the 11 songs here, and the beats (as much as I hate to admit it because they were put together by "Epic" Mazur, the Crazy Town dude) are full-on unstoppable. "Here it Comes" is one of the best lead-off tracks on any hip hop album in that decade, and Serch uses its force to barrel through the rest of the record with a momentum that doesn't relent.

While some of the tracks slow down a bit and some get a little bogged down with Serch's socially conscious gusto, it still doesn't stop him from running shit. With Serch, you know you're going to have to sit through his anti-racist tirades, and as long as you realize his heart's in the right place, they aren't too intolerable. But he always come back to the real-deal hip hop, and by the time the title track kicks in halfway through this LP, you know he's only getting started.

Shit gets even deeper in the second half, but the beats are so dope that Serch couldn't possibly hinder the rush, and he's too on point to drag it down anyway. Tracks like "Social Narcotics" and "Scenes from the Mind" almost get ahead of themselves, but Serch reins 'em in.

This is MC Serch at his peak, and I'm not sure if enough people realize that. Pick this up on the cheap and get served, foolios.

"Here it Comes"
Posted by Wockenfuss at 1:53 AM