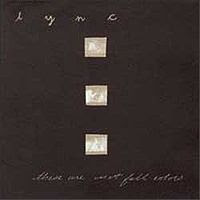 Ah, Lync. Just one of the many NW indie rock bands that should have done so much more but probably did themselves a favor by getting in and getting out. Now they are legends. To like twenty people.

I've had this record for quite a while now, and I listen to it here and there when the mood strikes me. I didn't get into it until well after it was released, and that's a shame. But it still sounds great today. Loud, odd, messy but crazy melodic. It's hard to compare these guys to anybody, and reading on their Wikipedia page that they influenced Modest Mouse doesn't seem quite right to me. Mostly because Modest Mouse is terrible and these guys aren't.

I don't know. They sound like K Records NW rock from the mid-90's, which is exactly what they are. It's smart rock with spotty production, blistering guitars with vocals that get (intentionally?) buried in the mix, so the singer always sounds like he's straining to be heard. It's the kind of music that makes you anxious when you listen to it. In a good way.

If you see this record for a few bucks, snag that shit. My brother urged me to by this when I found it on the cheap, and he was right. It's real good.

I can't quite describe what it is about this record, but I love every single thing about it. It is pretty much perfection to me. When I was around 19 and 20, the nervous angsty quality of the songs really hit home with me. It's one of those records where you sing along passionately but you have no idea what you're singing about or why you're so fired up. I don't know if this is a fact or not but I swear that the drummer Dave Schneider is not rocking a kick drum on this recording. If he is the engineer certainly never bothered to mic it. This might explain his odd drumming style (he does not sound like this on a later Satisfact album) and the way that the recording sounds somewhat empty. Obviously I have thought about it way too much. "Silver Spoon Glasses," "Pennies To Save" and "Cue Cards" are my serious jams.