Ray Manzarek - The Whole Thing Started with Rock & Roll Now it's Out of Control (LP, 1974) 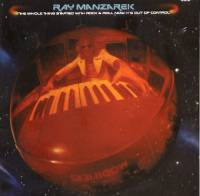 This one slipped away from me. Sorry it's slightly out of order.

As I've made plenty clear in this blog, I was a huge Doors fan in my youth. When I found this terribly-titled record when I was about 15, I was excited. The driving force behind the Doors sound goes solo, only a few short years after the Doors disbanded! However, I had heard Manzarek sing lead on a few Doors tracks, and I wasn't immediately sold on the idea of listening to him croon for the duration of an LP. But, I thought there might be something of substance here.

And while I wasn't completely off base, I've definitely held onto this record more for its novelty than for its music. Manzarek is a damn fine keyboard player, and he makes that abundantly clear through this album's eight tracks. And while he's a decent songwriter, he just can't hack it vocally. His voice is deep and without much movement, which clashes with the fancy arrangements on a lot of these songs.

Fittingly, it's the instrumental tracks and extended jams on here that are the most likable. Still, this was a weird time for rock, and hearing Manzarek toss in traces of disco-ish slink and thin funk is just hard to accept. On top of that, the lyrics are a rough mix of social commentary and flower-power idealism that have not aged well.

Of course, he finds a way to get Jim Morrison in on the act, which would become a constant theme for the rest of his life. On the jazz-funked, cat-scratchy "I Wake Up Screaming," he gets a reverb-buried Patti Smith to recite one of Morrison's old poems. It doesn't work.

Still, there's something interesting about this album. I think I've always been fascinated by the way the surviving Doors carried on after Jim passed away. So this is as least good for that.

"The Whole Thing Started with Rock & Roll Now it's Out of Control"
Posted by Wockenfuss at 1:49 AM

Great article. I was unaware of this album and quite agree with your comments about Ray's singing voice - it should never have been committed to tape.

I'll be including a reference to this in my blog at www.codaqueen.com - with appropriate thanks and recognition to your blog.

I think I listened to this once as a young man and that was enough for me. The vinyl jacket reeks of the over-indulgent mid-70s "rock" of the time. At least it always did to me.

As for the post-Jim Doors, how do you not have the two non-Jim Doors albums? "Other Voices" actually has some bright spots. "Full Circle" is probably really where they have some regrets.