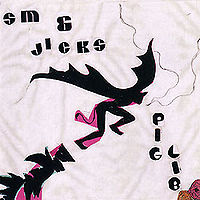 Malkmus has put out some challenging music during his career (Pavement's Wowee Zowee comes to mind), but this record may be one of the more tough to crack. Less slick and a lot less polished than his debut, this record is a loose exploration of odd (even for Malk) lyrics and warbly guitar parts that are turnoff-ish until you get used to them.

Once you do, this record is effing fantastic. (I feel the same way about Wowee Zowee.) It took me a while with this one, but it's turned into an LP that I think is as good as any of his other solo efforts. The songs are filled with twists and stop-starts, but that's nothing new for Malkmus. And a lot of the songs don't sound unlike his debut structure-wise, but they differ in the production methods. It seems like maybe he got his wall-of-sound ya-ya's out of the way and he's back to remembering why the sparsity in a lot of his songs worked in his favor.

Tracks like "(Do Not Feed the) Oyster" and "Animal Midnight" show him leaning towards the classic rock thing that he's now fully taken on, and they're both incredible tracks. "Vanessa from Queens" is as good as any single song in his solo career, and "Dark Wave" is an oddity that echoes with madness. In a good way.

"1% of One" is the really portentous cut here, an almost ten-minute jam that shows Malk really stretching shit out. It was this song in particular that had me feeling wary when this record was released, and though it's still not my favorite, I've learned to like it. Soon these long-players would become standard Malkmus fare; I just wasn't prepared for it.

So yeah, don't start with this one. But don't forget about it, either.