Stallion Alert at the Movies: My Dinner With Jimi (2003) 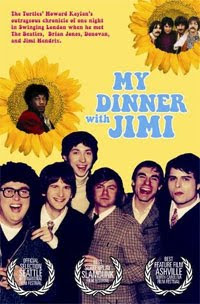 I forgot to change my address with Netflix before I moved last month, so I had to wait almost four weeks for this DVD to make its way to me via the address change I made with the post office. The funny thing is, that was just additional waiting tacked on to the months I had been waiting for this thing to even be released on DVD. I'm pretty sure I put this in my Netflix queue back in April, when I was going through a short-lived Hendrix phase that directly coincided with my writing about his albums for this blog. Anyway, it finally came out on DVD (Rhino, of course), and after what looked like some rough travels through the postal service (the DVD pack was borderline tattered), I finally got to see this movie that I could barely remember why I wanted to see in the first place.

Then I remembered: I like The Turtles (Flo & Eddie, really), and I like Hendrix. And this sounded like an interesting idea. Howard Kaylan (Eddie), lead singer of The Turtles, penned this script, a true story about The Turtles' first trip to England in the wake of their monumental success with the single "Happy Together." It also tells a bit of the story of the pre-fame Turtles, specifically their travels through the Sunset Strip in L.A.

I will say this for this movie: the script is great. But when you try to get actors to portray Jim Morrison, Jimi Hendrix, Frank Zappa, and all four Beatles (among many others), you've got your work cut out for you. Now, if you're one of those people who isn't bothered by weak caricatures of well-known rock stars, then this probably won't bother you. I made a point to just not get too worked up about any of it after the disastrous performance of the dude who played Morrison, and it worked to my benefit.

The guy who plays Hendrix is decent, and it's this scene - a late-night dinner between Kaylan and Jimi - that provides the apex of the film, and it's strong. In fact, the whole movie is fairly strong - though not in the budget department - it's just that some of the performances aren't. Still, the story is a great one, and if you're a fan of 60's rock (and aren't afraid of finding out that the Beatles were total pricks), this ends up being a fun little movie.

My Dinner with Jimi Trailer
Posted by Wockenfuss at 1:42 AM