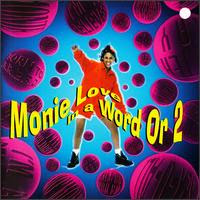 Not to make any statements that may be too rash, but Monie Love may be one of the more underrated female MCs of the 90's. Yeah, she got some love back then, but you don't hear her name come up much anymore. And it should – the lady can drop some rhymes. Of course, she was one of those up-and-comers whose career was done by the time she was 23. But, seriously: for a person that age, she's got a damn fine handle on the social issues of the time (especially those of women), and she's great at putting her concerns into words.

But, as we've learned through the years, conscious rap doesn't sell, so intelligent MCs get kicked to the curb while teenagers like me (at the time) reefed weed to Cypress Hill. We should have known better, but we didn't. I probably wasn't the ideal audience for this record anyway, but I have a fine time listening to it now. Monie's quest to save the world is probably short-sighted, but she means well, and having the benefit of listening to it 15 years later, it seems potent and overlooked. There are songs about pregnancy, songs about AIDS, songs about a woman's role in the world. It's big-time shit, and might have been too heady for the mainstream.

"Full Term Love"
Posted by Wockenfuss at 1:56 AM