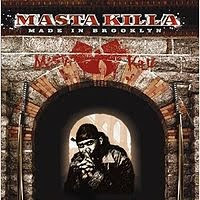 There's no skits, but there's also no beats by RZA. That's a rough trade-off, and as a result, this album's not quite as strong as Masta Killa's debut. Still, his lyrical style can make iffy beats seem better than they really are, and his nonchalant delivery can be hypnotizing no matter what's backing him. But, the music throughout this disc ends up being uneven, and it's a shame.

Still, this is far from a bad album, and though it starts slowly (what's up with that first track?), things pick up in the middle as soon as the other Wu dudes show up. Rae and Ghost take the generic beat on "It Is What It Is" and make it work. And when U-God, RZA, and Method Man bust through on the supremely dope "Iron God Chamber," shit really gets moving.

You'd think a remix of "Pass the Bone" would feature GZA, and you'd probably also think that "Older Gods Part 2" would feature Ghost, Rae, or GZA. You'd be wrong on both counts, and that just adds a little more confusion to this already strange album. The songs themselves aren't terrible, but the concepts are a bit strained. GZA does finally show up (with Inspectah Deck) on "Street Corner," and though the beat is slow and a little lackluster, the flows are there.

Ultimately, it's the spotty beats and flurry of no-name guest spots that clog this thing up and prevent it from equaling Masta's debut. That, and the embarrassment of "Lovely Lady," the last track on the disc. Just a sad song.

Still, it's always good to hear Masta Killa shine on his own, so I don't mind getting down with this one.

By the way, if you've never seen Masta Killa's ads for PETA, they're worth checking out.

"Iron God Chamber"
Posted by Wockenfuss at 1:01 AM

This album frustrates me simply because it can't hope to be as good as the first. I think of this as the album I expected him to release the first time around. Somewhat awkward and spotty yet still solid. And it is. Do you know what I hate about the first song? A lot of things. That the beat is awesome. Why is that bad? Because Masta let's a bunch of Wu kids rap on it instead of himself. Starting a solo album off with a song that doesn't have you on it is a terrible idea. Especially when the second song (your first song if your keeping track) lacks the cool beat of the first. The next song, "Brooklyn King" is alright but seems lazy. Luckily Rae and Ghost swoop in and destroy the next song and get things back on track. After the obligatory ladies song things really get good for me. "Iron God Chamber" and the "remix" of "Pass The Bone" are awesome and make the album worth the price of admission. The next two tracks though are terrible (who are the four Allah's that show up? What is that about?). Things end pretty solid with "Street Corner" being the highlight. I personally love that beat and this song reminds me why I always go to bat for Inspectah Deck as the unsung hero of the Clan. And yes, "Lovely Lady" is so bad it would fit in on "Tical O."