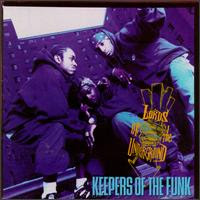 There is no excuse for me not knowing this album better. As I sit here listening to it, I realize it's been a while since I've spun this bad boy, and that's a damn shame.

But like any good mid-90's hip hop, it's not hard to slip right back into it. Lords of the Underground never achieved the level of fame that a lot of folks probably thought they would, but any fan of the "golden era" of hip hop will tell you these guys are dope. This record sounds positively dated now, but whatever. The thick bass lines and snare-happy drums hit hard, and the vocals are delivered with the sort of pressure that can make a slow beat sound frantic.

The Lords – like most rappers – tend to get a little hook-heavy, and the George Clinton guest spot would have been more impressive if dude hadn't shown up on nearly every rap record in 1994, but this album is decidedly dope. The beats ride the drums hard, and at times it sacrifices the melodies in the samples. But, it allows the vocals to ride high, and that's a good thing.

This is the kind of rap I dig. Ostensibly, it's angry and hot-blooded, but if you take the time to listen to the lyrics, it becomes clear that these dudes aren't dummies. And they're looking to drop the knowledge and out-rap your ass, not pull out the nine. I'm not anti-gangsta rap, but I'm definitely pro-smart shit. And this works.

I really dig this album. It's the awkward follow up to their stellar debut (which you should really track down). It's shorter and a little less catchy than their first outing but that's not a bad thing. "Steam From Da Knot," "Faith," and "No Pain" are undeniably awesome and a true testament to just how awesome hip-hop was in the mid-90s.